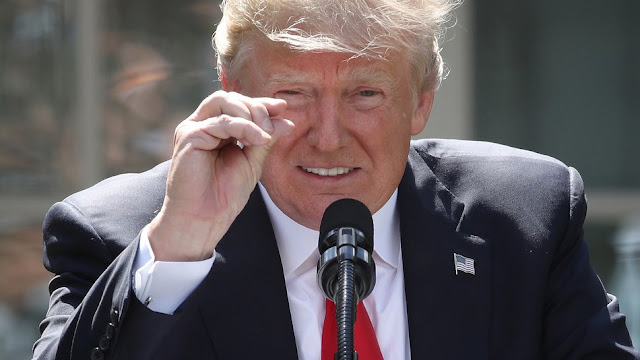 
In this, the season of giving thanks, let’s be grateful to Donald Trump. Confirming the failings of his version of capitalism, he and his excusers are proving, before it's too late, that unchecked melding of today’s Republican Party and Trumpism will render the world all but uninhabitable. Two recent publications make it clear.

Our government – Trump’s, ironically – just released a devastating report on current and future effects of climate change. Undeniably, increasingly, the US and the world are in trouble. Security. Infrastructure. Water resources. Food. Public health. Coastal cities. Peace. Counting on Americans’ preference for sale prices over considering not-fake threats to humankind, Trump tried to hide the report by releasing it on Black Friday. Like the CIA’s conclusion about who murdered Jamal Khashoggi, he says he doesn’t believe it. Middle-fingering the planet, he plans to promote fossil fuels at the upcoming UN climate conference. What embarrassing stupidity.

But he cares about average Americans, is making America great, his supporters insist, plugging their ears and shouting “La la la la la.” In part because Trump’s ill-considered tariffs cost them billions, Ford and GM have announced plant closings and laying off tens of thousands of workers. Trump’s predictable, accountability-deflecting response: attack and threaten GM’s (female) CEO. Meanwhile, farmers are burying unsellable soy beans or letting them rot in silos. Less than a tenth of the promised corporate welfare necessitated by Trump’s ego-driven trade wars has been sent their way.

Until President Obama, there’d been few rules requiring the testing of irrigation water for bacteria and other contaminants. Placing private profit above public need, Trump reversed the regulations. And there went the lettuce, along with the health of consumers.

Observing corporate donors to Republicans, demanding and getting deregulation at the expense of the public weal, offers a clear-eyed view of America’s trajectory. Unsustainable, unforgivable, Trump has uncoupled our economy from social conscience. Corporate greed, combined with his government’s disinterest in wise stewardship, have pushed us to a precipice. Members of his party don’t care.

Commissioned by the UN, an international group of scientists and economists just released a sobering report on the future of capitalism. The challenges of climate change, diminishing resources, rising population, failing infrastructure, and exponentially-increasing energy demands are exceeding the capabilities of traditional capitalism. A new economic model is necessary, the report concludes, one which places the survival of humanity and our planet higher than endless consumption and misdirected profit.

As America heads in the opposite direction, facilitated by dismissive rightwing and timorous mainstream media, Republicans turning to scapegoating and denialism, abandoning conservatism, offering ignorance and scorn (Santorum: scientists are in it for the money), but no utile solutions, optimism becomes a fantasy. Europe, less so.

Trumpic capitalism prizes short-term profit above all. Eschewing social conscience, it disregards the interest of average citizens, produces gargantuan budget deficits, is concerned only about maximizing income for CEOs and shareholders. It pollutes the land, poisons our water and crops, worsens climate change, consumes finite resources with no thought to the future. It institutionalizes destructive selfishness.

The fault is not with capitalism, per se. After all, it’s just a system managed by humans. The fault lies with those humans who sell, and those happy to buy, the idea that we needn’t think beyond ourselves. The ones who believe, or pretend, climate change is a hoax; or if it isn’t, it’s not worth addressing. Who approve farm and other corporate subsidies but consider recipients of social services freeloaders. The ones grateful to have a “leader” who makes ignorance and inaction acceptable.

Some corporations in our country have a conscience (unsurprisingly, they tend to have liberal ownership). Some countries on our planet have merged capitalism and moral sensibility, benefitting all citizens. Countries which also sit atop measures of health and happiness; which, understanding science, are switching to sustainable energy sources, a value derided and dismissed by Trump et ilk.

Ronald Reagan embedded in the Republican Party the idea that America is better off when it ignores the needs of the many in favor of the wealth of the few. Trump is his inevitable, if more heartless, successor.

Neither our Constitution nor economic theories accounted for or anticipated such rapid devolution, and too many Americans have been convinced it’s okay. In today’s political environment, it’s hard to imagine meaningful debate about these important, challenging topics, much less finding solutions. I can’t.

And I expect to hear from Trumpophiles who’ll prove me right.

Email ThisBlogThis!Share to TwitterShare to FacebookShare to Pinterest
Labels: climate change report, future of capitalism, Trump is a dick 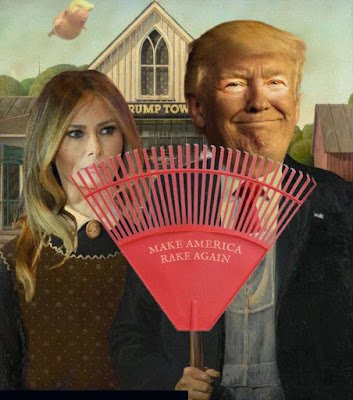 Putting my Saturday column (yes, I guess I'm back) up early. Might be too engorged later in the week.


After Washington went to mail-in ballots, I mourned going to my car, changing clothes, and voting again, just as Trump said. Those poll-ladies were suckers for my Groucho glasses. I forget how I signed in, and under whose names, but it must have been easy. Donald Trump doesn’t lie.

Probably I saw illegal immigrants voting, too. Lou Dobbs says millions did this time, and had a “huge impact;” so I must have seen a few back then. Had I known, I’d have signed them up for Social Security.

I was cavorting around Italy on Election Day, but news travels fast. Maybe it was delicious Italian coffee buzzing my brain, but Trump’s behavior after the election has seemed even more detached from reality than before. I laughed when Mitch McConnell warned against abandoning bipartisanship, though. Far as I could tell, he was serious. Spending hours in enormous churches containing the best of human artistry, much of it depicting the Final Judgement, one could almost believe such outrageous hypocrisy won’t go unpunished.

Which ought also to apply to Trump, who’d melt like the wicked witch were he ever to set foot inside an honest church, and whose two-a-day rallies leading up to the election impossibly topped his customary level of deranged, desperate lying. Democrats want open borders, will kill Medicare, won’t protect preexisting conditions: that sort of ungrounded madness. One of his ads was so dishonest and racist, even Fox “news” wouldn’t run it. But Trumpists loved his lies like I loved gelato.

About half the candidates to whom I gave money won. Looks like it’ll take another cycle or two, and more recognition of the damage being done by the party of Trump, for Texas to turn blue; it’ll get there, maybe even before it’s too late. Republican governors who remade their states into showcases of Republican economics, driving them into the sort of debt and failed governance Trump is creating, lost.

As sanity searches for a way back into American politics, I chose to return home, rather than seek asylum. Included in their broad representation of our nation’s diversity were eight scientists elected by Democrats, which holds hope for addressing climate change. Republicans elected three people currently under indictment and one dead pimp. Like refugees in the caravan, sanity has a ways to go, and could drop out before arriving.

Speaking of which, we haven’t heard much about the existential threat posed by that caravan lately, have we? Trump’s hate- and fear-mongering suckered his base, per usual. Now he’s lying about Finns and rakes, again showcasing his cluelessness about how things work.

Republicans have long realized that, given the widespread unpopularity and oft-demonstrated unworkability of their ideas, the ultimate threat to their power is a fair electoral system. They can attack education and expertise, lie without remorse, threaten the very idea of an adversarial, inquisitive press; but if all citizens have the same opportunity to vote, they know they can’t sustain such a top-heavy, self-serving agenda.

The midterms provided evidence both of the power of their suppression tactics, and evidence that it can be overcome. Many states flipped to Democratic legislatures. Undoing the sort of gerrymandering that gave North Carolina ten of thirteen US Representatives despite getting only half the votes becomes possible, even as their lame-duck legislators get quacking to prevent it.

Forced by the courts to redraw Republican-created districts, Pennsylvania voted about equally for Ds and Rs, resulting in equal numbers of winners. (North Carolina was similarly ordered, but ignored it!) Young people voted in record numbers, still appallingly low. When they see the forest for the burning trees, everything changes.

Over 300-million tickets were purchased in the recent national mega-lottery. Winners were known within minutes, including where tickets were sold. By contrast, vote totals and outcomes remained unknown in some localities after a week. Rolls purged of legal voters, long lines, mysteriously broken or absent machines, especially in minority districts: elections in the US are, to use Trump’s perennially misused phrase, a disgrace. That it’s deliberate becomes obvious. This, the literal stealing of elections by Republicans, not fake news about Democrats in disguise and illegals voting, is America’s true shame.

It won’t change under Republicans, and everyone who believes in democracy should care. Sadly, that doesn’t include Trump and his lie-preferring excusers, who, no doubt, also loved his third-grade-level insult of Adam Schiff.