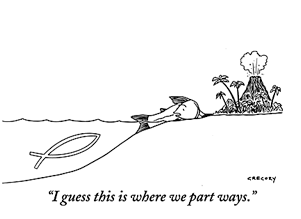 I have nothing to say about the murder of Dr Tiller that hasn't been said and responded to at all levels of rhetoric, on both sides. To me it's symbolic of a much larger issue. I'll just ask a question which I'm sure has been asked elsewhere, too, and probably more eloquently. It's directed at those who, whether they excuse it or not, refuse to call the act one of "domestic terrorism."

Let's imagine a Jewish synagogue, recipient of numerous threats from Islamic radicals. This, of course, happens regularly, and increases when Israel does something in Gaza. What if, last Friday night or Saturday morning (which is when services are held) such a Muslim radical entered the sanctuary and killed a congregant, in the name of saving or avenging Palestinian lives? Would anyone refrain from calling that an act of domestic terrorism? Would we be rejoicing, and heading to websites saying he had it coming? Or good riddance? Other religious radicals would, for sure. But would, you know, "we?"

I'm saddened by everything about it. Both sides of the arguments, the women involved, the doctors, the families, the protesters and activists of all persuasions, the responses. As President Obama has said, there are probably a few things on which all parties could agree if they'd stop shouting. But the demonization by each side of the other, the refusal to acknowledge the humanity and heartbreak of those on both sides is but one of several apparently unhealable wounds in our body politic, the sum total of which is such that we are slowly and inexorably destroying ourselves.

This incident is but an especially dramatic example of the ongoing and ever-increasing (voting for change notwithstanding) and ever more vitriolic and irreconcilable political decay of our country, the ultimate result of which will be self destruction. Neither party is guiltless. But what we've seen since the recent election is, to my eye anyway, unprecedentedly unhinged paranoia and rhetorical excess from the right. These self-described patriots and singular lovers of this country are the ones most responsible, if not for this particular incident, for the devaluation of the democratic ideals that once could have saved us: open honest debate, search for common ground, willingness to give a little in the greater goal of preserving our democracy.