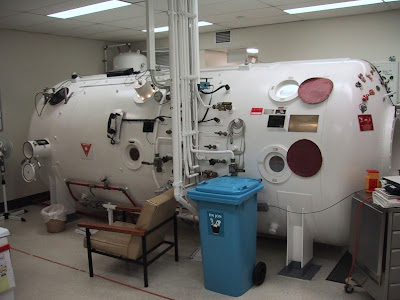 I'm reminded of a passage from my book:

"After nine months of idyll, my side of our little Beemer pulsated with silent tension, in time with the clenching of my jaw, as we drove over the Bay Bridge into San Francisco. From quiet walks around a lake to blaring horns, overloaded traffic, and the prospect of endless work, I felt the pressure squeeze the minute we made landfall. A couple of weeks later it occurred to me that I no longer noticed; one resets the dial to a different level of normal. No wonder we die young."

A week away from television, internet and, for the most part, newspapers, was therapeutic. Addicted as I'd become, checking email several times daily, visiting an array of political websites at least a couple of times a day, I was worried I'd undergo physical symptoms of withdrawal. Hands shaking, pulse weak and fast, sweat on my upper lip. As I've made fairly clear here, the state of our politics was driving me crazy. Not, I hasten to add, without damn good reason. The inmates have, most surely, taken over the asylum.

Surprisingly, it felt great from the minute I got there, and I didn't miss the information overload one little bit. I relaxed, I hiked, I read three books. Returning home, re-entering the digital world, I found myself recoiling as I scrolled through my favorite (ie, most visited, as opposed to most loved) sites; the physical tightness that had come to be the baseline for the past couple of years rose in my chest, and I stopped the scroll.

It's not as if I was in a complete cocoon. The location, deep into the Sierras, was not unpopulated. In conversations, it became clear I was the only liberal, treated, often, like a sort of oddity worth investigating. The bearded lady, the lobster boy. There were a few strenuous -- if friendly and respectful -- conversations.

I was struck by a couple of things: people spouted the stuff they hear from Glenn Beck as if the truth were self-evident. Confronted with arguments, they were quite amazed. It's as if they had no concept that there were, indeed, other facts. Or should I have just said facts. They'd simply never heard nor thought of some of the things I said. About health care, about the economy. Examples:

Are you on Medicare? "Yes." Do you like it? "Very much." So what's the problem with so-called government run health care? "Well, it's running out of money." Yes it is. Does it seem strange to you that after years of complaining about that, when a President actually tries to address it, the Republican party suddenly screams he's trying to destroy Medicare? "Silence."

"How come Obama never addresses tort reform?" Did you listen to his speech? "No." He mentioned it clearly. "Silence."

"How could we pay for a public option?" Well, there are billions being spent on premiums right now. That money can be captured in several ways: indexed premiums, new taxes, whatever. It'd still be lower than what people pay now, because private insurers take thirty percent in overhead and profits. Tell me what value you think private insurers add to the process that Medicare doesn't? "Silence."

"I worry about all those unaccountable czars." Yeah, you and Glenn Beck. Did you know that several of them were actually approved by the Senate? And that they all have actual titles that don't include the word czar, and that every president has sub-secretaries or whatever you want to call them? It's how efficient government works. "Silence."

So I'm of two minds: on the one hand, it would seem that there's a role -- theoretically at least -- for a voice of reason amongst the madness. On the other hand, it's not as if hearing facts is likely to have had any lasting impact. Stopped them short for a moment. Surely, though, back in their echo chamber it's as gone as the night skies there, high and clear, so filled with stars that words back up and stop entirely, while the soul breathes.

The paragraph from my book describes returning to San Francisco to resume training, after two years in the military the last one of which was spent at comparative leisure, at the edge of a small lake, time on my hands, working undemanding hours at an Air Force clinic; the pressure of training and then of Vietnam as remote as the top of Sierra Buttes, above Sardine Lake.

So I'm asking myself: is it worth my physical health to return to the fray? Re-engaging in the real world, being reminded daily of the insanity of those pissing in their own pool?

Email ThisBlogThis!Share to TwitterShare to FacebookShare to Pinterest
Labels: sanity without Hannity