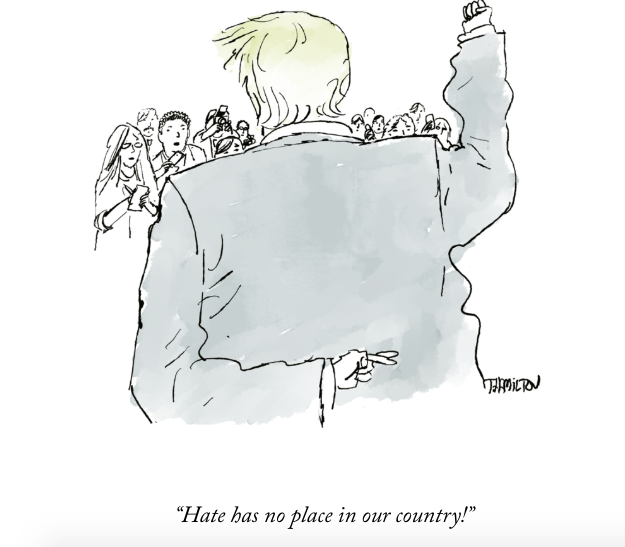 Here's my next newspaper column:

So much winning. Hard to keep up.

·      Reading his teleprompter like a forced hostage video, Trump condemned white supremacists and division. Which is like Jeffrey Dahmer condemning meat-eaters and freezers. His moral high ground cratered within hours.

·      Previously, at a rally, Trump: “How do you stop these people?” “Shoot them,” someone shouts. Attendees cheer. Trump laughs. But, we’re told, an inflammatory “president” bears no responsibility for inflaming the inflammable. A solitary Republican with guts and a conscience calls it what it is.

·      Trump wants to designate Antifa, some of whose members have stood up to and had fisticuffs with Nazis, a terrorist organization. White supremacist groups and Q-Anon qrazies, though, are welcome at his rallies.

·      FBI director Wray testified to Congress that “a majority of the domestic terrorism cases that we've investigated are motivated by some version of what you might call white supremacist violence.” No mention of Antifa.

·      Anticipating this flaying of the body politic must be among the reasons Russia chose Trump. Accordingly, their social media trolling pushes conspiracy theories and custom-curated lies, weaponizing Trump’s.

·      Kim Jong Un, Trump’s objet d’amour, launched another fusillade of nuclear-capable missies. Trump says not to worry, because they’re friends and Kim “will do the right thing.” Murderous dictators always have.

·      Iran fired missiles, too, and will resume enriching uranium. Under the agreement out of which Trump pulled, because, you know, President Obama, they were doing neither. Trump asked nations to join him in sanctions. Including the US, he’s amassed a coalition of one. Thus we see the respect he’s engendered around the world.

·      Fresh off maligning US Representative Elijah Cummings and other non-white citizens, Trump, who’s definitely not racist, gloat-tweeted about a burglary at Cummings’ home, virtually suborning more. Decent people would have abandoned him long ago. For hold-outs, therefore, his indecency must be the point.

·      That, and his cruelty to people unlike them. Trump’s latest budget throws three-million Americans off food assistance, adding to poverty and hunger. But, hey, small price for enriching wealthy donors. Mega-fraud – sorry -- megachurch leaders defend it, so it must be WJWD.

·      Exceptional among the holy, the Archbishop of Washington, D.C. criticized Trump for “diminishing our national life.”

·      Yet again, Trump is muzzling government climate-change researchers. In Greenland, unprecedented glacial melt is occurring, twelve-billion tons per day. July was the hottest month in recorded global history. Seventeen countries plus thirty-three highly-populated cities are running out of water. Those who deify Trump don’t care. At long last, have they no grandchildren?

·      Trump’s ignorant, self-referential, national-embarrassment response to the anniversary of the anti-Nazi Polish Uprising: “The people of Poland like me, and I like them… And I know they’re building an installation that — and they’re putting in all of the money... So they’re building something very nice for the United States to have.”

·      But all’s well: “We will be ending the AIDS epidemic shortly in America, and curing childhood cancer very shortly.” (And Mexico will pay for it.)

·      In North Carolina, more Republicans were indicted for election fraud. But dead people voted for JFK sixty years ago, so we need discriminatory voter ID laws.

·      The founder of “Students for Trump” pled guilty to wire fraud, stealing thousands as a fake online lawyer. A student of the master.

·      ISIS is regrouping in Syria, says the Pentagon.

·      Moscow Mitch broke his shoulder. False flag? Then he retweeted his opponent’s name on a tombstone. AFTER the weekend murders.

·      Asked about his vetting process when defenestrating abysmally unqualified John Ratcliffe as DNI, Trump said he relies on the press (DBA “enemies of the people”) to do it. Nine cabinet secretaries have left, many in disgrace. Not counting nominees withdrawn. At this point, President Barack Obama had had zero.

·      This week saw the perils of using tariffs as instruments of “presidential” pathology, especially when the target is smarter and has a plan. Despite those tariffs, trade deficits with China are setting records. We’ve now learned taxpayer-funded reparations to harmed farmers (socialism!) are going mostly to the wealthiest. And China just stopped purchasing US farm products altogether.