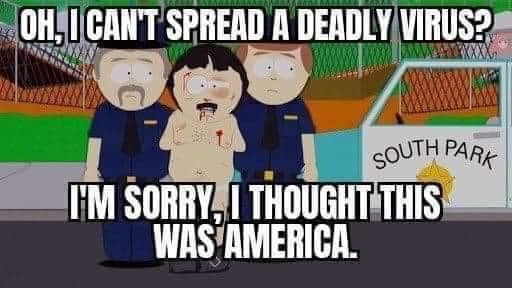 Next newspaper column (updated, below):


Golly. Because some of its denizens have tested positive for Covid-19, White House people are finding it “scary to go to work.” It shouldn’t have taken a virus to tell them that. Maybe “scary” is the necessary first step on the way to “embarrassing.”

With “president” and vice ignoring their own guidelines, even demanding people remove masks before photo-ops, it was inevitable there’d be contagion in the contagion. Even as Trump insists testing is “overrated” and “makes us look bad,” he’s now being tested daily, as are all people coming into the West Wing. Except for him, personnel are suddenly required to wear masks. He’ll make his workplace safe, but not yours. Yours doesn’t need to be. You can be a warrior.

By now, Donald “We’ve prevailed” Trump’s reelection strategy is clear: lie. All day, all night, Kellyanne. Truth being disadvantageous, lie. And, with Bill Barr’s help, erase history. Because Trump knows he’ll get no pushback from supporters, and because the “fake news” “enemy of the people” have gotten so trounced by the terrifying torrent of transparent Trumpic truthlessness that they’ve tossed in the towel. He knows it takes more time to correct his lies than he spends telling them. Co-conspirator Moscow Mitch just said Obama “left no game plan.” Brazen. Like Trump and Barr, he thinks you’re too stupid to notice.

For now, Trump’s biggest lie is that he’s handling the pandemic “beautifully.” Which explains, one assumes, his daily blame-placing and responsibility-shirking. Initially praising China’s Xi for his response to the virus, Trump is now not only blaming China and repeating the Putinesque lie that Covid-19 was created in a Chinese lab, about which science says the opposite, he’s implying it was a deliberate attack on the United States, a “worse attack than Pearl Harbor.”

Commending people who reject the precautions he’s now taking, people braying about rights but not responsibilities, Trump is rallying anger, his ploy of first resort. At governors, Democrats, President Barack Obama, China. As with Muslims, Jews, African-Americans, Latinos, and LGBT Americans since his “election,” attacks on Chinese-Americans are spreading, too, as the xenophobic deplorables wing of the faithful respond to his mendacity. Angry, ill-informed people, Trump believes, will keep him in office. Dr. Fauci is the latest target.

By defunding American researchers in China, where we need to be if we’re to understand how the virus spread and how to prevent it from happening again, Trump endangers even more lives. He’d rather attach pseudo-credibility to his China lies than prevent another pandemic.

Anyone who admires Trump’s crisis “leadership” should take nine minutes to watch this recounting of the US response and Trump’s part in it. Or admit a preference for remaining ignorant.

To the extent that actions have been effective, it’s because governors like ours stepped in to fill the federal leadership void. After ceding responsibility to them, Trump began criticizing and undermining their efforts, calling for resistance while taking credit for what they’d done. Lying. About who got what to whom, when. About how much was available, where. About total US testing compared to other countries rather than per capita. About “numbers are coming down.” On these matters, the record is clear. Trump is trying to ensure you forget.

Ignorance and anger are key to Trump’s reelection. Rather than a sense of unity during a time of unprecedented crisis, he’s staked victory on creating division. Unfamiliar with helping others for its own sake, he pits Americans against each other, for what he sees as personal advantage. Given Trump’s lifelong mendacity, it’s unsurprising.

What’s surprising is the ease with which he’s conned so many. All countries have individuals like Trump. But tens of millions? American exceptionalism has become its free-world-leading preference for misinformation, its docility before undisguised attempts to confuse and distract. Trump’s “presidency” fits perfectly with, amplifies, and feeds on the streak of paranoid and credulous conspiracy-mongering that’s always run through American life. After Trump applauded Michigan’s AR-packing protestors, people began calling for lynching Governor Whitmer. If such threats aren’t historically extraordinary, a “president” all but encouraging them is. His latest: “Obamagate.” Because he can.

Since 1789, we’ve survived isolated outbreaks of ignorance. Now, though, it’s a national movement, the bedrock of a major political party; one that countenances a lying “president” who claims absolute power; that remains silent when Trump calls
President Barack Obama treasonous, but calls the former president “classless” when he breaks his long silence to speak the obvious.

[Update, 5/15: since I published this, Moscow Mitch admitted he was wrong about Obama not leaving a plan. The version that will be in The Everett Herald will be a revised one, without the reference to his original claim, and a few extra words about "Obamagate:" that Fox "news" is running with it and Trumpists are swallowing it like a cheeseburger, without chewing.]