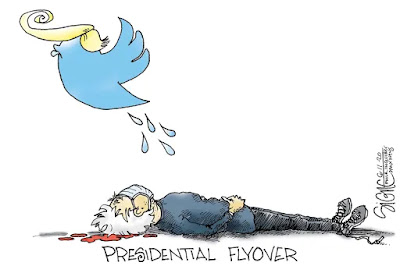 After eighteen-thousand documented false statements from our “president,” you’d think everyone would assume he’s lying until proven otherwise. You’d be wrong, of course.

Repeated endlessly, amplified by a carefully-crafted network of media propagandists, Trump’s lies are gobbled like manna, leading para-Trumpists to conclude there’s no downside to lying. “My attitude was get it done, but I didn’t say, ‘Go do it,” said William Barr, about the attack on peaceful protestors at Lafayette Square. Pepper spray isn’t a chemical, he added. Like Mueller found no crimes. From Trump and adjacent, lying is Plan A. Here’s the perfect example: “Antifa.”

Short for anti-fascist, the term described various groups in post-war Germany dedicated to preventing fascism from rising again. Connected loosely, if at all, they were, in essence, detectives, looking for leftovers from the Reich. People who wanted to preserve freedom and democracy from fascism. The idea naturally spread to America, where, until Trump, Nazis were disliked.

Raise your hand if you know what Antifa is here; its headquarters, its command structure, its membership requirements and how many it has. Do you know how to pronounce it? Are you sure all demonstration disrupters are Antifa? Keep your hand up if you believe it’s more dangerous to democracy than white supremacists, neo-Nazis, Proud Boys, Boogaloo Boys, the KKK. Have you seen Antifa members recruiting here, like Proud Boys are? Are you okay with the use of military spy-planes over American citizens?

Omitting the aforementioned rightwing gangs of “very fine people” who actually do have structure, recruitment, funding, and nationwide reach, Trump has described only Antifa as terrorists. Based on a report by a Russian operative working for a Russian propaganda network and carried on more-Trumpist-than-Fox OANN, (which looks a lot like “ONAN”) he even suggested the old man (my age) who was pushed by police is “possible Antifa,” and implied his skull-cracking fall was a gravity-enhancing “setup.” Not the first of Trump’s Russia-sourced conspiracies.

As Trump lurches ever further from his rocker, his confabulations are exploited online by entities posing as Antifa, announcing non-existent plans for violent invasions into white neighborhoods. One such deceiver has been identified as the white nationalist cabal “Identity Evropa.” In Snohomish, Klamath Falls, across the nation, the deceived show up, armed and drinking, which isn’t dangerous. When the fabricated invasion doesn’t happen, what so proudly they prance.

Contrary to Trump’s and Barr’s assertions, no one arrested in the current chaos has been identified as Antifa, whereas the presence of white supremacists and other rightwing agitators has been confirmed. The consequences of these “presidential” lies are grave. Inflamed by Trump, Barr, fascist-flirt Senator Tom Cotton, and Fox “news” saying the appropriate response to peaceful protest is sending in the troops, citizens are driving into crowds, grabbing long guns from their trucks and threatening to shoot. Doing it, in some cases. Even here, on Capitol Hill.

It’s not hard to believe this is exactly what Trump intends. Accustomed to lying or cheating or blaming his way out of personal responsibility for his entire life, he’s becoming increasingly desperate for something, anything, by which to regain traction. To help you ignore his serial failures and the flood of generals and admirals finally calling him out; even stirrings among Republicans.

From his depleted trick-bag, Trump chose the worst, which is to say the most Trumpian, option: turn citizens exercising their First Amendment right of assembly, petitioning equal justice from their government, into the enemy; get Trumpo-Americans exercising their Second Amendments rights to believe, and unleash the hounds of Hell. Seeding the civil war he has all but called for, should he be unable to suppress enough votes in November.

After Trump’s third-world-dictator attack on peaceful protesters, sending his message of “domination,” Americans are fighting each other. Convinced all demonstrators are “Antifa,” which, it’s been shown, comprises virtually none of the protestors we’re seeing, Trumpists feel empowered to threaten their lives, spewing Trump-endorsed rage at fellow Americans advocating liberty and justice for all. This may be his most dangerous, anti-American lie of all.

Meanwhile, as he pretends Antifa is our foremost enemy, Trump is precipitously and without consultation reducing our troops in Germany. This pleases Putin, who’s moving forces to his western border. What election help, and more, one wonders, has Putin has promised in return?

To salvage our democracy, it’s November or never.

For those interested in discovering what Antifa is and is not, these links are a start.