Gallbladder: The Donald Trump Of Viscera 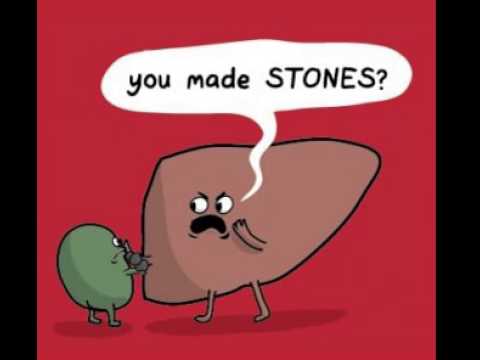 Though the outcome of Trump’s impeachment trial isn’t in doubt, it’s still going on, making now the obvious time to talk about your gallbladder, the Donald Trump of internal organs. Mostly unnecessary, it makes millions of people sick, and when it does, most are delighted by its removal and better off without it. Also, it has its own fake news.
Having separated a few thousand gallbladders from their owners in my surgical career, I claim more authority on the subject than, say, Trump on election fraud, Covid-19, or climate change. But this is bile of a different sort.
Tucked underneath your liver, just below the midpoint of the bottom of your right-front ribcage, the gallbladder is a slightly pear-shaped sac. Unlike your other, generally earth-toned viscera, when healthy it’s a startlingly beautiful robin’s-egg blue. Empty, it’s about the size of my thumb, which is likely bigger than yours. Full, it can be more like that pear.
Its purpose is storing bile, a liquid made in the liver to the tune of around a quart per day, passing into the gut via a tube called, appropriately enough, the bile duct. Most drips steadily into your intestine, where it facilitates fat absorption. Via a branch off the bile duct, a few tablespoons detour to your gallbladder, where it waits to be squirted into your intestine in response to eating, particularly a fatty meal.
Before civilization and supermarkets, gallbladders were essential. Back then, humans and other bile-producing fauna might starve for a while between meals, so a bilious bolus when gorging on a kill made sense (during fasting, your gallbladder gets very full). Nowadays, since we eat regularly and frequently, food exits the stomach comparatively constantly, rendering bile storage mostly inutile. Remember: the gallbladder doesn’t make bile. With or without it, that daily quart gets to your gut; just a matter of pacing.
A complicated solution of salts and other stuff, bile makes fats soluble in water. Like detergent. Evolution, or whatever alternative you believe in, is imperfect. For reasons including heredity, diet, hormones, and gravidity, ingredients can become insoluble, forming crystals. Which, concentrated in the gallbladder, can grow into what we call gallstones. Looking like kaleidoscopic, multi-faceted agates, some are quite beautiful. I’ve seen them made into jewelry. Others are ugly, clay-like, or both. There can be hundreds of them. Or few, or single, large enough to fill the entire gallbladder.
Unlike Trump, gallstones aren’t always an affliction. Many – possibly most -- gallstone-bearers are asymptomatic, some never knowing they have them; so the discovery doesn’t always demand surgery (cholecystectomy, commonly an outpatient laparoscopic procedure). Except for the presence of certain risk factors, it’s typically done if stones are causing problems, which they can do in several ways.
Most often it’s pain, occurring if a stone blocks the outlet of the gallbladder when it decides to squeeze out some bile. That can be extremely painful, felt below the right ribs and straight into the back. Or shoulder. Or lots of places. Called biliary colic, it usually goes away in a few minutes or an hour or two, as the cramped gallbladder muscles relax. The pain pattern is not always “textbook,” leading to potential misdiagnosis. Which explains, I think, most of the people dissatisfied with treatment.
More easily diagnosed and more serious is a stone lodged tight, in which case the pain persists, the gallbladder become inflamed, sometimes infected (cholecystitis). Worse still is a stone (has to be fairly small) passing out of the gallbladder into the bile duct. If it passes out into the gut, the problem resolves. If not, obstructive jaundice, pancreatitis, or severe liver and blood infection can result (cholangitis).
As explained, with some exceptions people get along fine without a gallbladder; therefore, treatment is almost always surgical removal. Pills can dissolve certain kinds of stones, but it can take months and there’s a high recurrence rate; true of any treatment that eliminates stones, or claims to, without removing the gallbladder. Which brings us to the foreshadowed fake news: gallbladder and liver “flushes,” “detox” cleanses. All-consuming, alt-med bogosity.
If you drink olive oil along with some sort of acidic juice, curdled lumps of oil may appear in your stool. The internet and some naturopaths will assure you those turd-curds are gallstones and you’re cured. Convinced, people have brought me theirs in Dixie cups. Nope and nope. There’s a belly-full of reasons why; pathophysiology, anatomy, and biochemistry among them. Demonstrably false (have them tested, get another ultrasound), it’s nevertheless believed like Q among the credulous.
Lacking enough space here, I offer an ancient post on my surgery blog, where there’s more explication. And, found by searching “gallbladder” on the blog, more still.
[Image source]
at February 11, 2021