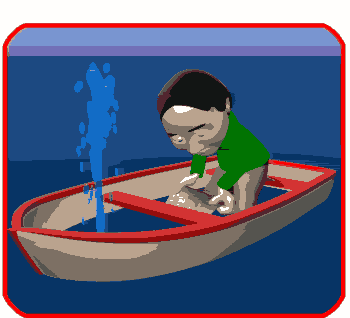 One of the few times I cried with my wife (except at some movies, of course: I'm a sensitive guy) was the day I flew off to Vietnam. It was the helplessness of being made to do something really huge, really unwanted, potentially fatal to me, or our marriage, or my career. That's what it was. The helplessness. (In the end, ironically, I was glad I went.)

I haven't shed tears (yet) but this bailout thing feels a little bit the same. Despite being pretty conservative (financially) I've lost a significant amount of my savings, on which I'm now entirely dependent. The cost of the bailout (or of a non-bailout) is not yet measurable, but it seems certain that it'll impact us all, in very bad ways. I don't much doubt it'd be worse if nothing were done. Still: this is all a result of failings and screwups and politics and ideas, philosophies and greed, of which I was not a part. Other people have done this to me, and to all of us. And what's really galling is that it's the very people whose corruption and stupidity got us to this point, who are the recipients of our largess. They screwed up; they're getting bailed out; it's screwing us all; yet there may be no choice but to do it. That's helplessness, and way beyond frustration. (And just to show I'm more open-minded than some might think, I just about choked when I heard Nancy Pelosi say "We sent a message to Wall Street - the party is over.") (Scene in my head: Parents come home early, find their kids and about fifty others partying, drinking, shooting up, screwing on the couches. "Okay kids, party's over," they say, handing out booze, money, drugs, and condoms. For sure, condoms...)

I saw Joe Stiglitz (I knew him a little in college, where we were together) on TV Sunday, saying the only place champagne corks were popping over this thing was on Wall Street. A sucker was found, willing to buy up all their "toxic" debt. The sucker, he said, is us. No bubbly here. But there, there is. (Joe also said action was necessary.)

When John McCain "suspended" his campaign, he first met with Congressional Republicans who were balking. Unable to admit their complicity in the very philosophy that led to the mess, they couldn't accept the deal. To do so would be actually to accept responsibility. Reports suggest McCain, who had no proposal of his own, only served to stir it up further. It's clear he didn't solve anything because, well, it didn't happen.

For his entire career, John McCain has been a self-described deregulator. Proud of it. Mentioning it whenever he could (whenever he wasn't mentioning, y'know, the thing he doesn't like to mention). His advisers are entirely of that cloth, writers of the un-rules in fact. How can people accept him as a possible savior of the situation with this record? Only days earlier, he'd said "the fundamentals of the economy are strong." (And then, straight-talker that he is, he claimed he'd meant the workers of this country are strong. Gimme a friggin' break! If that's what he meant, why didn't he say it? Especially when he'd, Nero-like, phiddled the phrase umpteen times before. Even George Bush hadn't said it THAT recently. Straight talkin' country-firster, indeed.)

The whole thing sucks. I admire those on both sides who voted for the bill, because it's clear the vast majority of the electorate is against it. I don't know who's right. But I know that taking such a vote can only be based on the conclusion that the result of inaction is worse; and a willingness to lay their careers on the line. And THAT, my friends, is country first.

So here we are, where we are. I'm mostly convinced the bailout is necessary (it'd be easier if the people who testify to the direness weren't the same ones lying about how everything was fine a few months ago, and if it weren't so reminiscent.) But what's curiously missing -- and it's nearly as frustrating as the plan itself -- is the slightest admission on the part of the conservatives who led the fight against regulations that they have anything for which to apologize, that the philosophy they've been touting all these years has come a cropper.

Makes me want to scream.

[Addendum: here's a link to the complete text of an Obama speech this morning. As we've come to expect, it's thoughtful, comprehensive, and clear. I'd call it "presidential." The contrast is stark.]