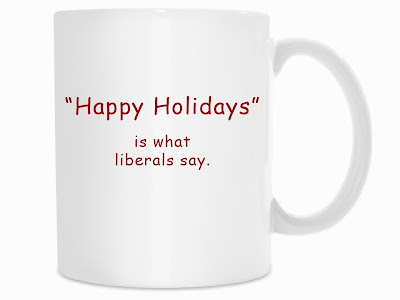 The above, according to an email from the Democratic Party that I found in my trash file, is being sold by the Republican Party to raise money. Har. Har.

Yep. Those awful liberals, trying to be inclusive. Send us some money so we can punish them for wanting to be respectful of all Americans. Not to mention those capitalist businessmen who prefer to welcome all comers into their stores to spend their money. Liberals, right? And not to mention that, like all the liberals I know, I'm happy to say Merry Christmas in stores or anywhere it's said to me.

Has there ever been a party so unabashed in proclaiming its narrow-mindedness, so pleased with its divisiveness, so certain in its manipulations of its supporters most base instincts, so sure that trotting out this tired trope every year will work forever? (The real war on Christmas, brought to you annually by Bill O'Reilly, Sarah Palin, et al: making it, over and over, a time for self-pity and anger.) Or, for that matter, so proudly cynical, so blithely dismissive of the most fundamental principles of the country for true love of which they claim (for fundraising purposes only, your results may vary) sole proprietorship?

[Image source from that mailer. Message from here.]