Of Dull Knives And Gunfights 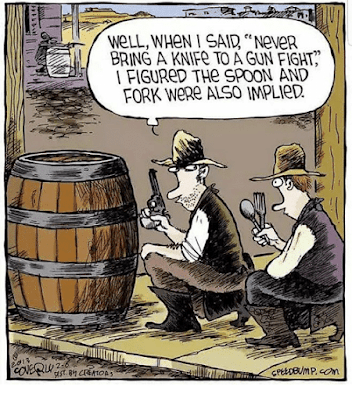 Talking Points Memo is one of the most informative, insightful, and intelligent liberal websites out there. Here's a slice of a post from Josh Marshall, its creator:


Behind the new faux controversy over Mueller getting Trump transition emails is a key and probably too little discussed aspect of the Russia story: Mueller’s team has some of the most accomplished and aggressive prosecutors and legal minds of their generation. They’re facing off against a team of has-beens, 3rd or 4th rate lawyers and in some cases simple incompetents. Why? Because Trump values sycophancy above competence and because none of the top lawyers were willing to work for him...

He goes on, compellingly: namely, that Mueller's people know what they're doing and, likely, already have the goods. Of that, I think there's little doubt. The big question is what Congressional Rs will do with the info when it comes out; and to what extent, if any, Trumpists will find it enlightening, and wise up.

The answer remains to be seen. About that, I'm less optimistic.