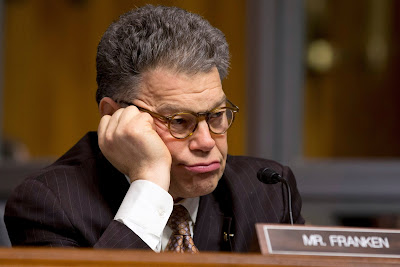 
Here’s what I wish Al Franken had said: “Yes, the USO picture is real, and so are some accusations, and I’m ashamed. I’ll never do it again. I understand my colleagues’ calls, but I work hard at my job, fight the right fights, and I’ll work just as hard to regain my reputation. If I fail, voters will replace me. Until then, I’ll keep working for progressive causes and exposing the dangers to democracy and our planet that this administration represents. I hope my colleagues will continue to work alongside me, as they have until now.”

I take him at his word that some of the claims against him are false, but, because there’s no acceptable number, it doesn’t really matter. I do wish there were a way to ascertain truth in a he-said, she-said situation, because it has enormous implications and potential for abuse, in either direction. Which is why I’m troubled by the pre-touchdown end-zone dances of people like Roger Stone and Steve Bannon, who somehow knew in advance that charges were coming, against Franken and others.

If, along with other examples of men behaving badly, this leads to changes in how women are treated in the workplace and elsewhere, it’s a good thing. If the recent spate of public exposure will wise men (holiday reference) up and give women the respect and safety they deserve, maybe it’s worth it. But the loss of a hard-working, smart, progressive senator who’s done more for women in a day than Trump has done in his life, over pale claims compared to those against Trump, is a high price.

And that’s the problem: politically, it’s an unfair fight. Liberals have lately been quick – too quick, in some cases – to rid themselves of alleged abusers, broadening the definition to near-meaninglessness. There’s a difference between rape (of which the occupier of the Awful Office has been accused) or grabbing women by their pudenda (about which the occupier was recorded bragging. On tape. In front of people. Before suggesting it’s fake), and patting someone’s behind. The former are criminal offenses. The latter is, at minimum, oafishness. Does it merit summary firing? I don’t know. I really don’t. I do know, though, that there’s an orchestrated take-down effort happening.

Is it coincidence that the charges against Franken came after he was so hard on Jefferson Sessions? Someone just pitched (clumsily) a fake abuse story about Chuck Schumer to news organizations. NPR canned Garrison Keillor, a Trump satirist, for what was evidently an isolated offense, a pretty minor one, about which he’d apologized, and the apology accepted. Until someone mysteriously stepped in. MSNBC fired Sam Seder, Trump antagonist, for a satirical comment excoriating Hollywood(!), sent to them, out of context and years later, by the same Republican operative who later forwarded that Schumer fakery. Now it’s The New Yorker and Ryan Lizza, outer of Scaramucci.

These overreactions reflect the sort of self-righteous “liberalism” Trumpists criticize but are happy to weaponize. In this arena, Democrats are the ones who’ve found a conscience. Republicans take advantage. Democrats take the bait. Franken takes the fall.

Mitch McConnell, after effectively endorsing Roy Moore, called on Franken to resign. Does that compute? Is it because Franken, ashamed, admitted failings while Moore and Trump, unashamed, didn’t? Is that the criterion by which we should believe women?

To defenders of Trump and Moore (let’s not forget Clarence Thomas), the only believable women are those accusing Democrats. That’s looser than Donald’s dentures. Many Republicans deny, others just don’t care about, or define away, abuse of women and young girls. Or, per preachers(!) excusing Moore, it’s okay because teenagers are “pure.” Besides, the Bible says women’s proper role is obedience and being vessels for the seed of man.

It’s a microcosm of where the parties stand on issues affecting women. Reproductive rights, pay equity. Women’s health in general, child care for working moms, CHIP (after outrage, it might get funded). Rape, even: there can’t be rape in marriage; make the best of a bad situation; if rape is inevitable, (and I quote) “relax and enjoy it.”

Do women who vote for this perversion of conservatism accept people like Roy Moore’s claims of their inferiority? Does their racism/Bible-based homophobia Trump everything? Sixty-three percent of white Alabamian women (and eighty percent of self-identified evangelicals) voted for Moore. So which is it?