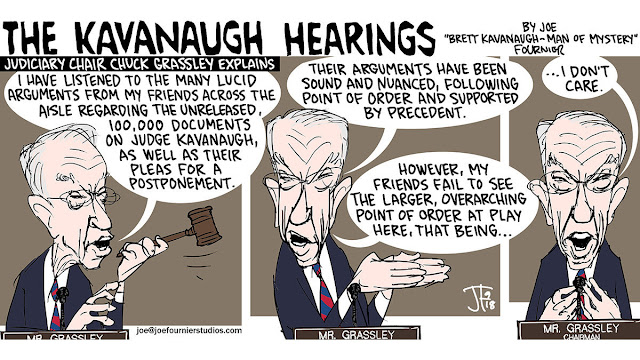 
Outcome predetermined, the Senate hearings on Brett Kavanaugh were revealing nonetheless. They were the culmination and confirmation of the lengths to which the devolved Republican party has gone to gain and maintain power despite having an agenda with which the majority of Americans disagree. And they showed the depths to which that party has descended since the days of such admirable Senators as Dan Evans, Mark Hatfield, Lowell Weicker, Everett Dirksen, Jacob Javits, Margaret Chase Smith, and so many more: people with whom one could disagree respectfully, and who sought common ground. Because that used to be America.

Third only to Trump and Gingrich, Mitch McConnell has done more damage to our legislative process and trust in our political system than any in modern times. The personification of hypocrisy, his career, by his own admission, committed to party over country. Calling it his proudest moment, he allowed not even meetings with President Barack Obama’s final SCOTUS nominee, let alone hearings and a vote, claiming precedent where none existed. And now he’s pushing a nominee whose pre-judicial career was partisan hackery unknown in any prior candidate who made it through. Kavanaugh’s boorish behavior continues today.

Forcing hearings before the record could be reviewed, looking the other way when tens of thousands of documents were withheld, Republican Senators made clear their desperation to solidify ownership of the Supreme Court before the next election, without even pretending to the Senate’s past integrity. It’s not mysterious.

Sure, their base will delight when Roe v. Wade is overturned, and when access to birth control is further reduced. But that’s distraction from the aforementioned truth: a majority of Americans disagree with nearly everything Republican for which they stand. Lacking a path to power by persuasion, counting on stacking the courts for cover, they turned to rigging the game. Which they’ve been doing with undeniable success.

Because whereas Republican Party affiliation has been declining for years, among young people Democratic membership has been on the rise: about twice the number identify as D over R. Among non-whites of all ages, well, it’s unsubtle. Self-described independents now number around forty percent of voters; among them, support for Trump is at its lowest, down to barely thirty-percent. Although still above eighty-percent, approval is lessening even among Republicans. Consider: eighty-percent of twenty-percent of Americans, plus thirty-percent of forty-percent means Trump’s quantitative support is impressively exiguous.

Importantly, it’s not just the current “president:” Republican members of both chambers, despite being in control, received a lower percentage of votes than Democrats. Yet there they are. Whether it’s the esoteric, like net neutrality and cannabis, or the broad-based, like tax reform, budget priorities, immigration, minority rights, religious separation, LGBT issues, abortion, or healthcare, Americans reject, widely, Republican priorities. How, in a democratic republic, is that possible? Ah. There’s the nub.

Gerrymandering, voter suppression, and Constitutional quirks. The last on the list won’t change anytime soon, if ever, but between the Electoral College, created before there were political parties or announced candidates or campaigns, and the preference given to voters in small (i.e., Red) states in the Senate and the number of voters per Representative in small states, it’s easy see how the minority of the populace can become the majority in representation, intended or not.

Worse, though, because they’re deliberate, extra-constitutional, cynical gaming of the system, are extreme Republican gerrymandering and intentionally suppressing votes of citizens who prefer Democrats. In those four states Trump won by a total of less than eighty-thousand votes, over two-hundred-thousand legal voters, mostly Democrats, were denied the right by “voter ID” laws, under pretext of non-existent in-person fraud. We’ve yet to learn if Russians hacked voting machines, but it’s as clear their fakery affected votes as it is that Republicans intend to do nothing about it.

With popular opinion and demographics abandoning them, Republican leaders came to understand they can’t win fairly on the issues. Seeing the writing on the wall (not all of it in English), they turned to virtual electoral fraud. Lower courts, both state and federal, on too-rare occasions have overturned their most egregious efforts, but it’s not over until the Supreme Court has its say. They’ve already gutted the Voting Rights Act. Enter Kavanaugh. We know what’s next.

Once upon a time, principled Republicans would have rejected embracing theft over cogency. Do any still exist?