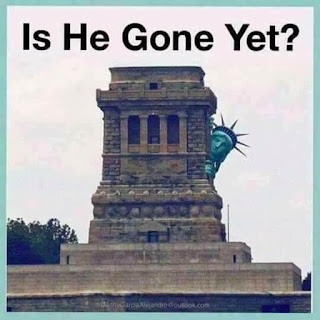 Because of what is, I sent this in before final election results. Perhaps they’ll be known, sometime.
No matter what, and as nice as the prospect of returning to honest, competent governance is, Trumpism is far from vanquished. Sixty-some-million voters considered Trump’s ceaseless torrent of lies, inciting hatred for fellow citizens, taking credit for things he didn’t do, refusing to admit failures, his and his family’s cashing in on his office, his racism and encouragement of white supremacists, kidnapping and putting children in cages, no plans for the next four years other than more lying and grift, and said, “More, please.”
The question of how that’s possible was answered, succinctly, by Madison Cawthorn, twenty-five-year-old, newly-elected US Representative from North Carolina. Having previously boasted that he’d crossed off a bucket-list item by visiting Hitler’s home in Berchtesgarden, and claimed that Cory Booker “wants to ruin white males,” his first action after his election was to tweet, “Cry more, lib.” And there you have, as they say, it.
When a “president” has no agenda, when his party didn’t even bother with a platform before the election, there’s nothing to vote for. Clearly, then, it’s about voting against. “Libs.” Who believe every citizen has a right to vote without standing in line for ten hours; who think people of all colors, religions, sexual orientation, place of birth, political preference, and economic status deserve to be treated fairly and to have an opportunity to thrive. On a livable planet. With access to quality, affordable healthcare. Worse: they believe in science and prefer facts over Fox. Yep: if anyone should be made to cry or have “it” stuck to them, it’s those who choose community over Trumpic hate.
Having failed to build a Mexico-paid wall (and only a few miles, by taxpayers); failing to produce a healthcare plan; making a pandemic worse by mocking and ignoring everything that would have helped; maintaining – until he didn’t – the Obama recovery only by producing massive budget deficits, and creating fewer jobs in his first three years than President Barack Obama did in his final three, before the pandemic; having been duped by “lover” Kim and BFF Putin; with coronavirus cases at all-time highs; lacking anything substantive to offer, Trump could only conduct campaign rallies that were nothing but super-spreader hate-fests. Over chants of “Lock them up,” and “Fire Fauci,” no positive ideas were heard. Not one. Which was still damn near good enough to get him reelected.
Prematurely ejaculating self-canceling cries of victory and fraud, Trump stumbled upon a new word: “Disenfranchise.” In his troubled mind, counting all legitimate votes disenfranchises those already counted, if thorough counting takes time. Inigo Montoya has something to say about word-choice.
Trump’s lawsuits and accusations of fraud have been accompanied by no actual examples. He doesn’t care. Nor does he consider preserving faith in democratic institutions part of his job. If polls were wrong, predictions of his post-election perfidy weren’t. Thursday, his crudely dishonest speech characterized counting votes as “finding” them, “whittling” his down after he’d “won.” While complicit liars amplify the mendacity, armed believers mass threateningly outside vote-counting locations, brainwashed into sedition.
Leading up to the election, Fox polled one-hundred-thousand voters. By margins of around seventy-percent in each category, they favored upholding Roe v. Wade, universal access to healthcare, DACA citizenship, more spending on renewable energy, and agree that racism is significant, in the country at large and in policing.
Which, you’d think, means the anticipated “blue wave” would have happened. That it didn’t means Trumpists have no idea what liberalism actually stands for. Because Democrats are less good at lying than today’s Republicans, and because they have nothing as effective as rightwing media at inseminating misinformation, millions of people voted against their own priorities. Whatever it is they think liberals are, “own” them and “make them cry” trumps everything. That’s Trumpism. That, and the dangerous, lie-based, post-election anger Trump has fomented.
If Joe Biden assumes what was considered, until Trump, leadership of the free world, and if Republicans keep the Senate (we won’t know till Georgia’s January runoffs), Mitch McConnell will be the most powerful and least honorable man in America. Singly, he’ll keep Democratic legislation from consideration and progressive nominees from approval; disenfranchising (!) seventy-four-million winning voters.
That’s what happens when millions of Trumpists think like Madison Cawthorn. Electing an ignorant football coach, for example, rather than a man who beat the KKK in court. Spineless Lindsey Graham and Susan Collins. And, a metaphor for our times, a guy who died from Covid-19 a month ago.