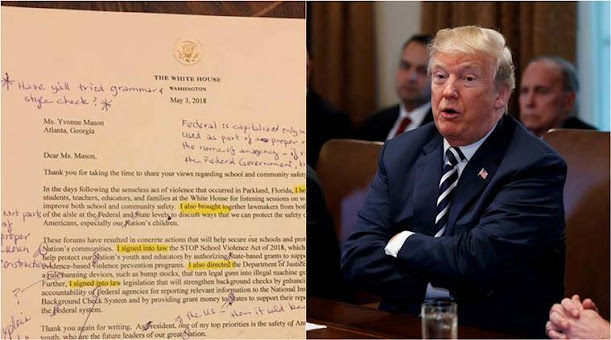 Win or lose, Trump has been an effective educator. Some lessons we may have suspected previously, but, like all great teachers, he’s made them unforgettable.
He’s taught us the Constitution is only as good as the intentions of those charged with defending it. Because its creators assumed at least minimal commitment to its principles, it contains all-but unworkable remedies for presidential incompetence, mendacity, and avarice, especially when combined with greed and hypocrisy from his party.
We’ve learned that constitutionally required congressional oversight, and the Emoluments Clause, and such laws as the Hatch Act are meaningless. “Presidents,” Trump teaches us, can ignore them with impunity. By Trump’s schooling, impeachment works only if Congress considers obstruction of justice and abuse of power more felonious than fellatio. And Section Four of the Twenty-Fifth Amendment is vapor.
We’ve learned about turning government agencies – Justice, State, Intelligence, even USPS and the census – into instruments of “presidential” power; about making the presidency a personal profit center, millions not caring how dangerous and corrupt it is, and Republicans uninterested in stopping it.
Since day one, Trump educated us about Americans’ willingness to excuse, deny, or ignore opprobrious presidential lies. He’s shown the degree to which rightwing media have succeeded in extinguishing their audience’s ability to distinguish – much less care about – truth.
What explains continued support for a “president” who’s been lying forever about the pandemic, who just declared his administration has ended it, even as daily cases surpass previous highs and hospitals are again becoming overwhelmed? Trump’s lesson: Care only about yourself. Screw everyone else. Sacrifice is stupid. So are scientists.
Here’s more from Trump University: he and his administration consider their supporters gullible fools, who see themselves as law-and-order patriots even while chanting, without irony, “Lock them up.” Who love it when their “president” says, about the Chairman of the House Judiciary Committee, “This guy, he ought to be put away, or he ought to be, you know, something should happen with him.” Who cheer and tumesce as they imagine what it might be that “should happen,” thinking whatever it is, it’d make America great.
That’s the starkest lesson of “presidential” pedagogy: America, once the world’s most durable democracy, is no less susceptible to the embrace of totalitarianism than any other formerly free, now despotic countries. The veneer of civilization, he’s shown, is easily peeled away by a demagogue willing to ignite people’s fears and hatreds and insecurities; by lies and unending disinformation; by fascist-echoing rallies meant to inflame division; here, as much as anywhere in history.
Flinging the word like a throwing-star, Trump demonstrates that because millions of Americans have no idea what “socialism” is, for one example of easy manipulability, the word can be used to turn us against each other in time-tested, big-lie ignorance.
The teachings of Trump are no better illustrated than by the rise of terrorist tribes, dba “militias,” showing up in force, armed, after he urged “liberation” of states whose governors issued orders to control the virus. White supremacists crawling out of the shadows. Bearers of insane conspiracies, funded by and welcomed into his party. Weapons considered indispensable at polling places. Citizens harassed, loudly, contemptuously, menacingly, while standing in line for hours, committed to resisting Trump’s attempts to snuff democracy. Daily, these proto-totalitarians are encouraged by their “president.” How naïve to have thought America was better than that.
Did our founders foresee legislators and judges representing, by a large margin, the views of only a minority of Americans, able to shape our laws, including ones aimed specifically at limiting the majority’s ability to cast their votes? Another lesson learned.
Asked whether America remains capable of common purpose and sacrifices seen during WWII, who could say yes, as millions of Americans refuse to help their neighbors by the easy task of wearing a mask in public? As a “president” belittles it and governors pigheadedly discourage it, even as their states lead the nation in infections and deaths, and as their refusals to follow the science have prevented the reopening of the economy they demand.
How did we become so divided, armed and “standing by,” willing to forsake our history? It’s not a multiple-choice question. The answer is singular: Trumpism. Will the tutor be granted tenure? With half the enrollees locked in a windowless classroom, the rest waiting for hours to re-register, we’ll find out.
Extra credit takeaways: When a pandemic gets tough, the not-tough hold rallies. If you can’t win votes, block them.
Also: we’ve been tucking in our shirts all wrong.
[Image source]
at October 29, 2020