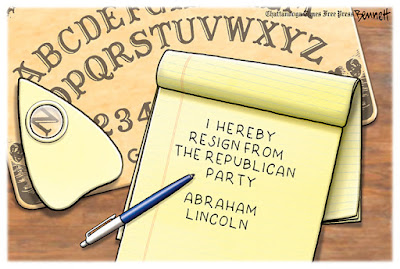 On Monday, the chairman of Snohomish County Republicans treated us to a letter to the editor, in which he unburdened himself of some deprecatory opinions, along with selected facts well-known to everyone with knowledge of American history. The Democratic Party, he reminded us, once included a bunch of Southern racists. Which, until several decades ago, it most surely did.
Reaching back almost two hundred years, he wrote of times when his party didn’t. Name-checking Abraham Lincoln, he expressed pride in his party’s “rich history,” as he put it, “of supporting African-Americans.” Other than the current, dominant, southern faction of the chairman’s party, who doesn’t like what Abe did? Since then, though, along with science, equal access to voting, and preference for leaders who don’t lie about elections and pandemics, his party’s support stopped cold as a polar vortex.
The chairman’s lesson took a recess somewhere around 1965; which all but begs us to provide proper, less-selective updating. Key terms to keep in mind as we try: Southern strategy; “welfare queens”; LBJ; Voting Rights Act; Civil Rights Act; Shelby County vs. Holder.
Our lesson could be condensed, simply by pointing out it’s to the Republican Party those racist Democrats fled after LBJ powered the Civil Rights and Voting Rights acts into existence; and that they were welcomed the way Democrats (not Republicans, weirdly) are welcoming vaccines. Understanding he’d be causing Democrats to lose the South, LBJ did it anyway. That kind of doing right for Americans, no matter the impact on party, has gone sadly missing from Republican leaders; especially in, but not limited to, the past thirteen years.
After offering that Democrats should apologize for slavery, Jim Crow, and the KKK, the chairman finished with a familiar flourish of bravado, proclaiming “I will not be bullied by someone who calls me a racist.” Good. If he isn’t, he shouldn’t be. (If, in fact, he’s been called one, it’s fair to wonder why, though.) But – and this is important – one can rationalize racist policies without being racist.
Moreover, he holds office in Trump’s party, which now considers racists part of the base it must indulge. Bullied or not, he should consider owning up. Rather than employing ancient history to distract from the present, he should be calling it out. Apologizing, even. Because, unlike current Democrats with regard to past racism, many in today’s Republican Party are active practitioners.
Nor would it hurt if the chairman were to apologize for a party trying to erase what happened on 1/6 while blocking meaningful investigation into it. And for the majority of its members who still believe the “presidential” and party-promoted lies that incited it.
White supremacists, who idolize Trump and Tucker Carlson. Proud Boys. Neo-Nazis. Oath Keepers. QAnon. “Fine people on both sides.” Calling Black Lives Matter a terrorist organization. Removing polling locations and drop-boxes in primarily Black precincts. Requiring photo ID, while closing places to obtain them, in those same precincts. Troglodyte racist Stephen Miller, centrally located in Trump’s White House. Idaho. Might the chairman address those issues? They didn’t just appear, after all, but descended naturally from the devolution of his party over the last sixty years.
Recognizing to which party the racists had decamped, Richard Nixon deployed the “Southern Strategy,” whose purpose was to make sure they’d never leave. Later, Ronald Reagan reemployed it, rather unsubtly launching his “states’ rights” presidential campaign near where three freedom riders had been murdered. Nor was there anything subtle about his well-received attacks on welfare recipients, or to whom he was referring.
Long before he became Chief Justice of the United States, John Roberts was on a mission to cripple the Voting Rights Act, which undoubtedly factored into his appointment. Once on the Court, he greeted the lawsuit known as Shelby County v. Holder like a long-lost child. Declaring racism over, he and his Republican majority bled out requirements for federal approval of voting-related legislation in southern states.
The blood hadn’t dried when those states began the disenfranchising of Democratic constituencies – mainly the African Americans for whom Mr. Chairman professes party support – which continues, exponentially, today. A loyal Republican, Roberts pretended it wouldn’t happen. If it did, it wasn’t the courts’ business.
As policy, racism in our major political parties did a complete and lasting reversal in the century past. Confirming their abandonment of “supporting African-Americans,” sounding dishonest alarms about Project 1691, making false claims about Critical Race Theory, and legislating against teaching anything similarly related to slavery, the chairman’s party is trying hard to keep that fact hidden.
Knowledge threatens their power, making public schools and universities only their latest scapegoat.
[Image source]
at May 27, 2021