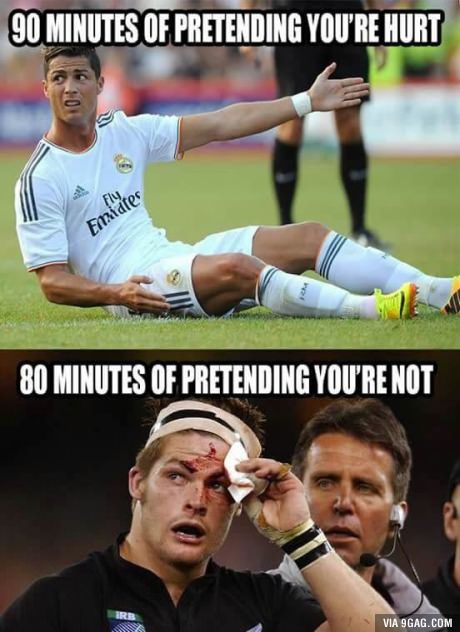 Soccer. I was barely aware of it until college, where I watched a game for the first time; mainly because “we” were playing Harvard, which featured a legendary player named Chris Ohiri. Somehow, I’d heard of him, even though I knew approximately nothing about the sport.
Ohiri had come to Harvard from Nigeria, where he’d been a record-breaking decathlete and an Olympic soccer star. As a freshman, he’d scored thirty-six goals in nine games, which, now something of a soccer aficionado, I find all but unthinkable. In his three years on the varsity squad he scored forty-seven.
The game I saw was perhaps the only one in which he didn’t, because we had a player whose speed matched his and whose only job was to dog him. Chris said after the game that our guy, Larry, was the best American he’d played against. I played rugby with Larry, who’d often run to the sidelines to suck on a cigarette and quaff a beer before rejoining the game. It was a club sport. Further comparisons to follow.
(Checking on Ohiri for this column, I discovered that shortly after graduation, then enrolled in Harvard Business School, he was diagnosed with terminal cancer, and went home to Nigeria to die. Because the ruling government saw his returning-hero status as a threat, he was arrested on arrival, and died in custody.)
I came to appreciate soccer when our son took it up, eventually becoming a striker on a championship select team. I knew I qualified as a fan when they attended an invitational tournament in B.C. Having been on call the night before, I’d missed their match against the Canadian U-17 national team. A dad told me it was the best they’d ever seen: a 0 – 0, or, as we like to say, nil - nil tie. Only true fans can say that about that.
I bring this up because I’ve been binge-watching Euro Championship and Copa America games. At its best, soccer is, indeed, “the beautiful game.” The skills required are, not to sound creepy, unnatural. For example, the first time our son received a kicked-off football, in middle school, he ran it back for a touchdown. Running with an air-filled, ovoid leather-like sack tucked under one’s arm is natural. Same with tossing a spherical object through a circular ring. Not everyone can, but our bodies are designed for it.
Dribbling with one’s feet at full speed, however, maintaining control while making balletic moves around opponents, able to fire off an accurate shot, wasn’t engineered into the blueprints. Nor was precision-controlling a ball flying at you from afar. With a shoe, not a glove.
Also, soccer is ridiculous. Because it’s very hard to score, a team can dominate play in all ways and still lose, by virtue of one sort of fluke or another. It’s not rare. Worse is that the higher up the professional ladder you go, the more the players are inclined to fake injuries, to extract a penalty call from the referee. Hurl themselves to the ground, theatrically; flail as in the agonal throes of death, though touched in the most innoxious of ways.
In my rugby days, there were no substitutions. Contact was full, forceful, and free of padding. If a player went down, it was likely for the count, helped or carried off the field, leaving his team to play a man down. Or two. Or three. Otherwise, we soldiered on, bleeding into bandages, bones poking through skin (if memory serves).
By contrast, footy-fakers pound the ground in unbearable pain, roll like British cheese-chasers, waiting for the referee’s call. If none is forthcoming, they bounce up, limp once or twice for effect, and resume playing. It’s a medical miracle, really. Homeopathic, almost.
These rules could make the game less annoying:
1. If a player rolls more than once, he (women don’t flop) must leave the pitch for five minutes per roll, with no substitutions allowed.

2. Players may pound the ground twice. Each additional whack triggers two minutes off the field. If the player pops right up, the minutes are doubled.

3. Faked damaged limbs will be quick-dry casted for the remainder of the game.

4. Political candidates must explain corner kicks, penalty kicks, and the off-sides rule; any that votes to prohibit teaching about racism may never use the term “cancel culture.”

5. While watching replays of consecutive nil-nil soccer games nonstop for twenty-four hours, people who believe Trump will return as “president” in August must locate the Constitution’s Reinstatement Clause and speak in public to explain it.
[Image source]
at July 07, 2021