It's Better In Italy 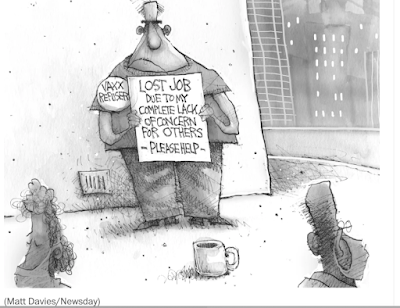 My absence from columny was due, in part, to having been nine time zones and more than a world away from the Trumpic outrages that have consumed me for the past few years. Italy. How calming to spend hours in magnificent medieval – and older – churches, absorbed in fantastic mosaics and frescos, statuary and architecture. Wandering ancient Greek and Roman ruins.
We – my wife, one of her many sisters, and I -- were accompanied by a friend, a brilliant professor of art history, whose broad and deep knowledge of such things and ability and willingness to share it were gifts beyond measure. I’ll never process it all.
For many miles every day, we walked in 90º weather; in Palermo, Napoli, Roma, Apulia, and surrounds, such that, despite indulging in perfectly legal, recreational gelato, we lost weight. In Italy! Home of pasta and pizza and cappuccino. Even as we gained knowledge.
And something more politically pertinent about our trip: Masks. Vaccination ID. Testing and vaccination stations on the streets. No one complaining. It was Italy, after all, at the beginning of the pandemic (which really happened and still is, in case you believe the deniers), that was hit hardest. Maybe it takes that amount of death and economic devastation to seal the message, in ways it seems not to have here, for selfish, deluded Trumpists.
Maybe Italians are just smarter. Or traditionally more tuned in to family and friends; to caring about them. A tradition, for the last two thousand years, that actually follows the teachings of Christ, as opposed to the grifting, phony, fake Trumpochristianity that doesn’t.
To enter every museum, we showed proof of vaccination, had our temperature taken. On every bus, train, and subway, in which sanitizer dispensers were abundant, as they were in stores and restaurants, everyone wore masks without drama. Amazing. In a grocery store, I’d forgotten to put mine on and was reminded. “Mi dispiace,” I said, embarrassed. The clerk smiled.
How comforting to be surrounded by caring people, to whom it was as natural as, well, breathing. Who cared because it’s right; and because it’s what revitalized their economy. Streets were full of people strolling, enjoying life. Restaurants were full, too, as were other businesses. Not just with tourists. All because of uncomplicated, shared empathy; anathema to today’s Republican core. Why is it so impossible for them?
If America isn’t the only country with anti-maskers and anti-vaxers, ours are louder, more ubiquitous, more violent, more unrepentantly stupid and dangerous. Claiming it’s about freedom when, in fact, they’re prolonging the need for restrictions. Encouraging more dangerous mutations of the virus. Killing themselves by stupidity and denial.
And, by filling hospitals when they needlessly fall deathly ill, killing others from whom they’ve taken up beds. Swallowing unproven and disproven “cures,” refractory to facts about them. (It was in doses 100 times higher than achieved by ingesting the stuff that Ivermectin was shown to have some activity against the Covid-19. In a Petri dish.)
Made helplessly defenseless against the lies, Trumpists believe they’ll become magnetized, or sterile, or chipped, or bearers of “mutant” DNA, or mega-testicular, or, as a “doctor” recently proclaimed, that the vaccinated will be dead in five years. Clearly, there are people spreading those lies who do so deliberately. One can only wonder why. Especially when the victims are now, nearly exclusively, of their own political ilk.
Even at that human cost, they’re willing to keep the pandemic going, so, come the next election and the second coming of Trump, they can blame it on Democrats. What other explanation is there for creating their cult of death? Other than making a ton of money off it, of course.
To enter Europe, we had to show proof of vaccination; and have a negative Covid test within 72 hours of returning home. By golly, the tests were negative, despite being body to body in public transportation, in which everyone was masked and most, presumably, vaccinated. No surprise. Not mysterious. All it takes is a spirit of cooperation and common cause. And a lack of unpatriotic idiocy.
In the apses of many of the churches we visited were beautiful mosaics of Christ Pantocrator, in which He gives a sign of blessing with His right hand, holding the New Testament in His left. In some images, the book is open, indicating the path to paradise. In others, it’s closed, portending the fate of people who reject His teachings. In those, it seemed He was speaking through the ages and directly to Trumpists. Who, while pretending to godly patriotism, couldn’t care less.
at September 29, 2021