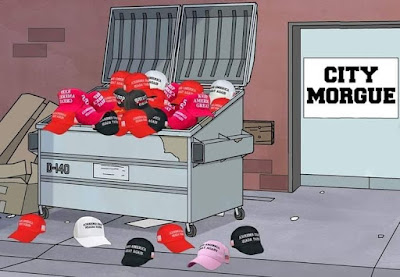 In a country gone nuts, providing facts is as effective as bailing a boat with a salad fork. Nevertheless, patriotism and decades of doctoring compel me to try.
What spurred this particular holler into the wind was learning of anti-vaxers who need blood transfusions, demanding they come from unvaccinated donors. Because, you know, human embryonic cells. Or microchips. Or altered DNA. Turn them into "mutants," Alex Jones warns.
Because they care about humanity, people who donate blood are likely to be vaccinated. When I’ve ordered transfusions, the victims were usually mid-exsanguination. “Ten units,” I’d order. “O-negative, stat!!” No preference-polls taken. Also, blood is scarce nationwide. Would they rather die? They’ve said so, vaccine-wise. So, good luck.
It’s true that development of the Covid-19 vaccines employed a fetal stem cell line, used in research around the world ever since it was cultured in the Netherlands. In 1973. It’s unclear whether that line came from one of countless abortions induced by God – aka “miscarriages” -- or by doctors. More importantly, whereas the vaccines’ safety was initially tested utilizing cells from that venerable line, their production neither uses nor contains them.
Or microchips. And, as anyone with eighth-grade science education knows (this may exclude people who were taught science in certain red states, or here whose parents convinced them to disbelieve), there’s absolutely no way vaccines alter recipients’ genetic material. Zero. Zip. Nil. Nada. None. Convinced? Dumb question number one.
Refusers do, of course, expect all the benefits of their rejected medical science when they get sick. Imagine that.
After five decades toiling in operating rooms, wearing masks for hours, I attest to their safety. It’s our global adversaries and Trumpists (difference?) who, wanting to divide us, spread the lies. Who would equate demanding common sense and common purpose with oppression? Pal Putin, for one. And Trumpublican leaders, and Trump, and rightwing media inciters, all of whom require a steady supply of enraged followers.
Which they have, in a decades-old, in-house-designed, carefully-maintained line of medical-strength, unquestioningly malleable adult humans. Sharing characteristics with that half-century-old embryonic cell line: Lab-tested; reliable; behaviorally predictable. Only the latter, though, was intended to benefit humanity.
Nikki Haley, once and future Trumpublican star, just injected more pretense into the body politic. About President Biden pressuring the Taliban to not interfere with departing US citizens and Afghans who’d helped them, she opined: “Negotiating with the Taliban is like dealing with the devil.” Inexplicably, she didn’t burst into flames.
What a brazen example of expecting stupidity. Trump “negotiated” (stretching the definition) with them bigly, gave them everything, bragging all the way. Pressured Pakistan to free the imprisoned criminal who may become Afghanistan’s new leader; forced the Afghan government to release five-thousand more, now among the takers-over. Got empty promises in return. As with his other favorite tyrants, he still praises them. Does ex-ambassador Haley believe Trumpists are that ignorant? (Me: no comment.)
As he fantasizes “presidency” 2.0, the last thing Trump wants is President Biden succeeding in anything, including the pandemic. So effective was his previous dissembling that, when he half-heartedly suggested vaccination to Alabama rally-goers last week, they booed. They’ll continue dying. Even after ingesting deworming cow paste, which, helplessly Trumpofoxified, they trust over vaccines.
To the same end, Trump continues shoveling his big election lie. Which, even after witnessing the feathery explosion of Pillow Mike’s promised, irrefutable, reinstatement-inflicting evidence, the cult fervently believes. In a country gone nuts.
Across the land and here in Snohomish County, parents storm schools in anti-mask anger, physically attacking teachers, pulling off their masks, hurling racial insults, threatening more violence. Made to believe deliberate falsehoods, from which they’ll never extract themselves. Uncaring who gets infected, including themselves and their children.
It’s conceivable they don’t intend to become killers. Without question, though, some will. The kindest explanation is endless Foxotrumpian lies, leaving them defenseless. Otherwise, it’s that they’re dangerously dim. Or, worse, that they’re inherently malicious.
Texas Governor Gregg Abbott, anti-mask hero and pandemic down-player, became infected after meeting unmasked (but vaccinated) with a covey of wealthy, unmasked, Texatrumpic donors. Evidently afraid of dying, he started taking Regeneron’s monoclonal antibody treatment, indications for which rarely include people who, like him, are asymptomatic. “I will downplay the seriousness for thee,” says he, “But not for me.”
Trump and Abbott: anti-abortion (Trump, only recently, because…), anti-fetal stem cell research, taking Regeneron’s antibodies. Which – surprise! -- was developed using the very same embryonic stem cells as the vaccines.
Feel silly yet, anti-vaxer/anti-maskers? Used? Deceived? Manipulated? Dumb questions two through five.
Clearly, they’ve been implanted with ignorance-inducing microchips.
at August 25, 2021