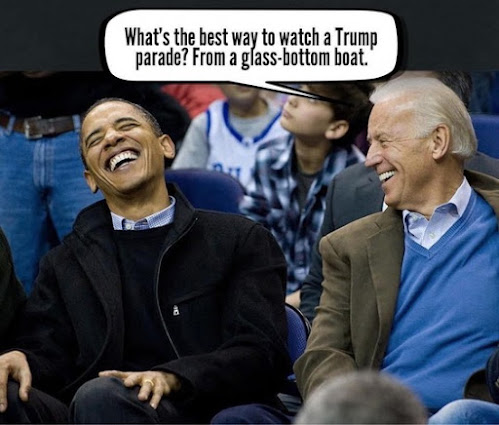 God finally let His feelings on Trump be known when He sank those rally-boats. Knowing Trumpists, by nature, would ignore sensible rules and be unconcerned for fellow boaters, creating undrained swamping was easy. “Make Liberals Cry,” said a sign on one of them. Ironic. Rather than feeling concerned for the lost boats, though, let’s agree all boats matter and move on.
Speaking of BLM, responding to last week’s column, a reader renamed them “Behave Like Monkeys.” On lake and land, one’s impression of Trumpists is confirmed.
Are blind racism and curated hate for liberals enough to justify voting for a flag-hugging faker who considers our troops “losers,” especially those who were captured or killed? Do loyalists believe his denials despite his being on record calling John McCain one? When even Fox “news” confirms the reporting, citing “impeccable sources”? Better known for the peccable kind, Fox’s corroboration is compelling.
His decline accelerating, on Monday Trump accused military leaders of waging wars to boost defense industry profits. He, who brags about “rebuilding” the military and selling our fabulous weapons around the world. Funny: it’s presidents and Congress, not generals, who start the wars the military wages. Not funny: the “Commander-in-Chief” is decomposing before our eyes.
None of this bothers Trumpists, as long as he continues to validate their aforementioned bigotry. This week he moved to end racial sensitivity training, calling it “un-American.” In his America, where supporters care only about themselves, he’s right. It’s also admitting he can’t run on managing the economy or the pandemic.
Maybe that doesn’t matter, either. As November approaches, Republican states are in full vote-suppression mode. Even after a detailed study found a sixty-eight-percent error rate when Georgia’s then-Secretary of State purged legitimate, mostly Democratic voters while running for governor, winning narrowly, the state is celebrating another purge-fest. In Florida, the local USPS, taking orders from Washington, refused inspection of two major centers by a Democratic US Congresswoman.
While that was happening, we learned Trump’s unqualified Postmaster General became a Republican star by unlawfully forcing his employees to make campaign contributions, then laundering reimbursement. Crooks and liars. The lot of them.
Meanwhile, Trump disgorged his own solution to overcoming votes for Joe Biden, urging his people to vote twice. Was he joking? He repeated it more than once. Either way, William Barr, his lying, nakedly partisan, malevolent Attorney General, refused to say if voting twice was illegal in all states. (It’s a felony, Bill.) Then he described an incident of mail-in ballot fraud that never happened. His latest is brazenly federalizing the New York-based defamation lawsuit against Trump by one of his many rape-accusers. Theoretically in office to defend our laws, not the “president,” he’s just another of Trump’s America-destroying lackeys.
Moving from executive duplicity to pervasive Republican science-rejection, Idaho’s legislature just voted to end coronavirus-related restrictions. Pandemic? Legislate it away. Perfect.
How many slaps can one forehead take? How much can Trumpists swallow before realizing they’re being poisoned? Whatever the number, we’re not there. Nor will the recent barrage of wildly dishonest ads, falsely edited videos, and deceptive tweets from Trump cause supporters to question where their gilded idol is taking them.
The “where” is an Orwellian dystopia in which the worst response to the pandemic among all developed nations is, in fact, “the best.” In which his predecessor should be in prison for hallucinated “treason.” In which, deploying his “best words,” he calls his current opponent “stupid” and lies about imminent socialism because he can’t claim anything worthwhile for himself. It’s a world wherein admitted lies about the pandemic are justified to avoid creating “panic,” but claiming liberals will burn your city, open all borders, and outlaw your religion is necessary information.
The “where” is a fearful country ruled by a delusional sociopath, whose intelligence agencies are afraid the truth will upset him, so they water it down; where they’re ordered to hide the fact that Russian hackers successfully placed vote-erasing malware in voting machines. Also, where climate change doesn’t exist.
Last month, in Seaside, an ISIS-mimicking caravan of trucked Trumpists, bearing long guns and sidearms, occupied its main street, proving, uh, something, looking tough in their mirrors even though no demonstrators were there to intimidate. At a pro-Trump rally in Salem, a speaker, to cheers, called for Democratic leaders to be “shot dead in the streets.” That’s where Trump has taken us.
And, yes, because we care about America, the planet, our children and yours, it makes liberals cry.
at September 10, 2020