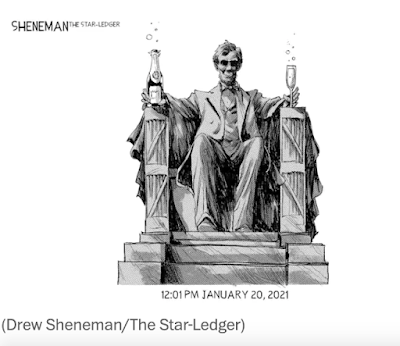 In a post-inaugural interview, Congressman James Clyburn quoted Alexis de Tocqueville: America is great because its people are good. If its people cease to be good, America will cease to be great. That it was an inaccurate paraphrase of a misattributed quote is beside the point: in recent years, more clearly in recent weeks, we’ve seen the truth of it.
Trump’s insurrectionists who trashed the Capital, whose internet sanctum, Parler, is now hosted by Russia, aren’t good people. Nor are the politicians and media propagandists whose outrageous lies they believed. The result is a stain on America: A Green-Zone inauguration secured by thousands of troops; streets cleared; the National Mall – if movingly decorated – empty; the building still bearing wounds.
Addressing the tens who showed up to see him off, the blame-worthy “president” was absent; the first since 1869 to abscond from that confirmation of enduring democracy. Trump et uxor chose not to welcome the Bidens to the White House, nor did they join his predecessors and successor at the Tomb of the Unknown Soldier. Amazing gracelessness.
Exiting, Trump, who only started domestic wars, pardoned a parade of perfidious politicians, tax-evaders (including a Fox spouse), and secret-keeping cronies. Among the excused, though, were some who deserved it, including several who’d received harsh sentences for minor drug crimes, mostly marijuana-related. Good for him. (For those whose lips are forming the words “Clinton” and “Marc Rich,” virtually all Democrats were outraged.)
Showcasing the scamanality of his “presidency,” Trump’s penultimate act was reversing his own “swamp-draining” order preventing his hires from lobbying, for five years; they’re now free as he to access the grift. “So long, suckers,” should have been his final words.
While Trump bunkers at Mar-a-Lago, we turn to President Joe Biden, recalling the astounding difference between his and Trump’s inaugural words.
Trump inherited a soaring economy, history’s longest run of rising employment, decreasing budget deficits, nuclear containment of Iran, and the tail ends of wars President Obama didn’t start but from which he was trying to disengage. Yet Trump spoke darkly about “American carnage,” a weirdly dystopian view of a country that was, but is no longer, surging forward; a speech foreshadowing the cascade of lies for which his “presidency” would become known, ultimately leading to the insurrection from which we’re trying to emerge.
(If only one is feasible, let Congress invoke Section 3 of the 14th Amendment rather than finishing impeachment.)
In contrast, President Biden heads a nation deeply divided between fact and fiction; reeling from a pandemic so poorly managed by a mocking “president” that hundreds of thousands died unnecessarily, and the delivery of vaccines for which has been a cavalcade of disinformation and absent planning. Businesses closed by the thousands, staggering unemployment, people struggling to maintain food and shelter.
Yet, not ignoring the source and implications of the insurrection, he spoke with optimism and words of healing; reminders of what can be done when Americans cooperate with one another (already falling on many senatorial and rightwing media deaf ears.) Without specifying Trump’s biggest lie, he called for a return to truth -- tough for Tucker, Sean, et. al., whose success depends on inflammatory untruth. It’s doubtful they’ll reassess their complicity. (One sane Foxian approved.)
Opposite to “I alone can fix it,” acknowledging it’ll take all of us, President Biden enumerated the challenges: racism, domestic terrorism, climate change (we’re back in the Paris Accords!), the economy. And, of course, the pandemic (we’re staying in the WHO!) Which is not to say he, or anyone, expects Congressional kumbaya; just a remembrance of commonality when arguing. It’s happened before, if so long ago it seems like an illusion.
Afterward, Kevin McCarthy, leader of the Republican insurrection in Congress, mouthed pleasant words. Likewise Mitch McConnell, who, after four years of catalyzing Trump’s destruction of Constitutional separation, comity, economic sanity, trust in elections, and pretty much everything else, had just, belatedly, acknowledged it was Trump’s lies that led to the attempted coup. Action, not words, are what’s needed now.
She gave no inaugural speech, but Kamala Harris’ presence was powerful. So many welcome firsts. The tie-breaker in an evenly-divided Senate, she might become the most consequential VP, ever.
Sincerity. It’s said if you can fake that, you’ve got it made. Wordlessly holding a never-read Bible after gassing peaceful demonstrators, Trump faked it and seventy-four-million Americans bought in. You can’t fake the sincerity we heard in eighty-one-million-vote-getting President Biden’s speech. If we can’t all agree with his plans, let’s agree on that. And, with a little cooperation, see what happens.