They NEED To Be Lied To 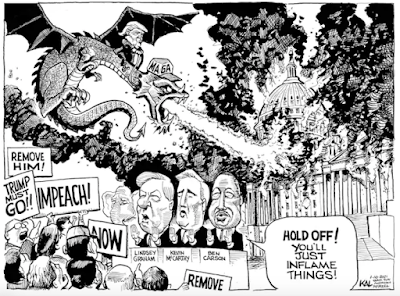 You don’t just have to be delusional to believe Trump’s lies about the election. To pillage our nation’s capitol, deface it, destroy treasures, defecate and urinate on it, set up a hangman’s noose and a guillotine, attack and murder cops whose blue lives you once said matter, you NEED to believe them, for reasons so deep-seated that nothing will open your eyes.
Self-evident to those whose eyes aren’t glued shut by Trump’s adhesive mendacity, you have to be – mostly – white, racist, xenophobic, and anti-Semitic. The logo shirts, the signs, the flags, the chants. The faces. The feces. Reenacting George Floyd’s murder. Seven FBI-identified racist groups. In Trump’s madding MAGA terrorists, there’s no mistaking it. Inside and outside the Capitol, in the White House and in their media fantasy-fortresses, democracy is despised for an obvious reason: in increasingly diverse, multicultural America, it threatens white supremacy.
It helps, too, to harbor such devotion to a lying “president” who affirms your hate that you’ll turn with him on people he praised moments earlier. Mike Pence, for whose execution they ghoulishly chanted, swallowing more Trumpdacity about the Constitution. They aimed to kidnap, possibly kill Nancy Pelosi and other members of Congress. Impossible? They beat a police officer to death; another, they dragged down stairs and repeatedly struck with an American flagpole. “We love you,” Trump told them. “You are special people.”
Patriotism ended when they began shouting invective and marching to the tune of a criminally dishonest “president,” who even lied about joining their parade; instead, slinking back to the White House to do what he does best: watch TV. He loved seeing his inflamed hoard, it’s reported, desecrating the Capitol. Unmasked and unworried, traitorous Trumpists yelled “this is OUR country!” Not, evidently, Americans’ who, because we’re a democratic republic, voted Trump out overwhelmingly.
Posting their crimes on favored fascist websites, MAGA terrorists were surprised, later, to be hunted down by the FBI. “This is not who I am,” they wept. But it is. Freely, they chose to riot over freedom.
Not only those MAGA terrorists are inimical to America; it’s also Republican lawmakers and pundits who ceaselessly replayed Trump’s big lie, hypnotically exhorting their manipulees to “stop the steal.” They knew the election was fair; confirmation came from everywhere.
Casting their lot with blood-eyed felons, they peddled the lie even after the insurrection, saying it’s for voters who, deceived into believing, “have questions.” Polls show a majority of Republicans say they’ll never trust elections again. Mission accomplished. The bigger the lie, the better it works on Trumpists. Telling truth to them is a career-killer.
Their lies wed them to Trumpism, forever. Afraid to be honest, most Congressional Republicans went along. (To be fair, in Trump’s un-great America, because of his homegrown MAGA terrorists, to oppose him is to fear for one’s own and one’s families’ lives.) The ten (only ten!) who, this time, voted to impeach, deserve admiration.
Well-armed came the MAGA terrorists. In the aftermath, we’re hearing of shocking complicity from within. Congressional sergeants-at-arms, Republican state attorneys general. Many Capitol cops, crazed Qanon congress-people. The FBI downplayed explicit online plans for “war.” Even the Pentagon, which sanitized them as “First Amendment protestors,” slow-walked authorizing the National Guard. Does anyone believe Trump was unaware of intelligence warning of insurrection? Is it unlikely he gave orders to stand back, or that his lackeys followed them?
The difference from responses to Black Lives Matter demonstrations couldn’t be more revelatory.
Having pushed their divisive dishonesty for months, Trump’s Congressional mouthpieces called for “unity.” Enough to question the existence of G-d, their faces didn’t melt. Stop the divisiveness, they hypocrisize, after perpetuating a “president” who couldn’t survive without it. Let’s not hurt those marauders’ feelings, nor the non-marauders’ who believe our lies. Including our latest, observably false, that the MAGA terrorists were antifa.
Like debriding a suppurating wound, punishing Trump’s incitement is a prerequisite to healing. If “unity” is what those guilty Republicans suddenly want, let them state, unambiguously, that Trump’s claims about a stolen election are seditious lies; apologize for waiting so long to say so; renounce their craziest members and stop lying to voters who elected them.
Deadly as a virus, fascism is infecting America: in the White House, in some police, military, Republican legislators, and throughout Trump’s minions. If Trump and the nationwide terrorists he created aren’t punished maximally, our Constitution is meaningless. Demagogues like Trump – there’ll be others – easily create murderous mobs out of “ordinary” people. It can’t happen here? Abetted by millions of self-described conservatives who stood by, on the precipice, silent, it just did.
[Image source]