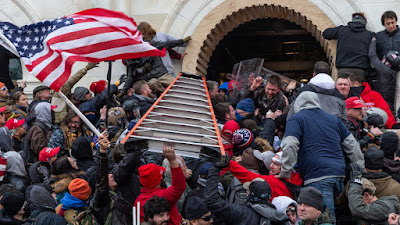 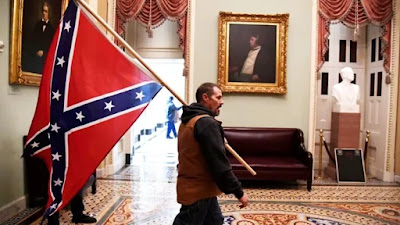 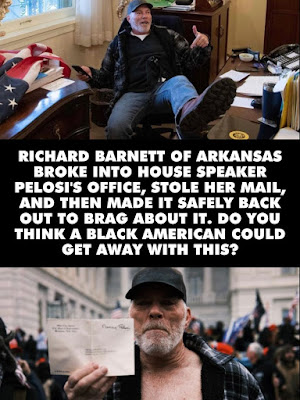 This week we – and the world -- recognized who Donald Trump has always been, and what he and his party have done to our country. The good thing about Republican senators letting him off the hook after impeachment is that we’ve come to see how right Adam Schiff was when he predicted it. And we’ve learned the price of that party’s descent into insurrection.
Henceforth, barring an unlikely return to conservatism and respect for the Constitution, today’s Republican Party will be remembered as the outlaw party. The party that chose a racist, xenophobic, lying bully, sex predator, and scamming, tax-cheating “businessman”; and, for four disgraceful years, condoned his contemptuous spurning of the law. That chose authoritarianism over constitutional governance, that embraced Trump’s attempt to delegitimize a fair election Joe Biden won decisively. (It wasn’t Trump’s election most Democrats contested: it was his subsequent criminality.)
The party that considers any vote not for them to be fraudulent; a win by any Democrat, anywhere, to be, by definition, illegitimate. Whose claims of election fraud have been debunked, their legal arguments dismissed as ridiculous; who didn’t care and kept pushing, right until – and for some, even after – Trump’s riot.
What’s the constituency, other than the psychopath-in-chief, to whom those refusenik R senators and representatives were playing? Violent Proud Boys; the cult of Q-anon; domestic terrorists responding to Trump’s call to “be wild” by storming the Capitol; the millions of Trumpists (including tens who write to me) who, believing his hallucinatory claims of massive fraud, repeat the disproved “evidence” as if it’s implanted in their brains -- not by Bill Gates’ vaccines, but through the neurotoxicity emanating from rightwing radio, internet, and TV.
To secure permanent deregulation and tax cuts for themselves, Republican leaders have created ignorance and suborned rejection of democracy among their voters. To them, our system of governance and its institutions are anathema.
So let’s call them what they’d become, until, maybe, around midnight Wednesday: the party of treason, led by a traitor to the Constitution, who, throughout his entire “presidency,” fomented the violence that occurred during a process that’s always been a testament to America’s tradition of peaceful transfer of presidential power.
The list of those responsible for that seditious despoiling is long, starting and ending with Trump, who’d brutally cleared peaceful, non-violent protestors so he could wave a Bible as if he knows what’s in it, but did less than nothing on Wednesday. Who, after his phalanx of phools responded to his incitement earlier that morning, unconvincingly called for “peace,” then canceled the call by repeating his malignancy about stolen elections and evil people, announcing his “love” for those defiling “special people.”
The list includes Pence, McConnell, Graham. Cruz and fist-raising Hawley. Rightwing media ogres like Hannity, Limbaugh, Carlson, Ingraham, who profit from making their listeners angry and stupid, the success of which we’ve just witnessed. Every complicit Republican who, save but one, either perpetuated Trump’s lies and malfeasance or cowardly ignored them, who forsook their duty during impeachment, who feared telling the truth to their voters.
Buffoonish Rudy Giuliani, who called for “trial by combat” right before the Capitol was stormed by rioters seemingly confident police wouldn’t stop them or, because they’re white, do them harm. (Some cops, who should be fired, took selfies with the rioters.)
Every brainwashed Trumpist who repeats his lies, refusing, as taught, to become informed. Who swallowed Trump’s mendacity about BLM but cheer rightwing terrorists whose goal – unlike BLM’s – is violence. Who continued to follow him, despite – or maybe because of – his perpetual lying.
How worse than ironic, seeing Trump’s terrorists vandalizing the Capitol, waving the American flag while figuratively burning it; raising Trump and Confederate flags, confirming their rejection of the Constitution. Every one of those delusional subversives, whose hate for America they consider, in their poisoned minds, love, should be arrested, tried, and deported. To a country whose leaders think like they do: North Korea, Saudi Arabia, Russia. Countries that watch Trump and his traitors attacking America from within and cheer.
On January 6, 2021, the legacy of Trump’s “presidency” and of the sad fall of the Republican Party that led to it, was sealed. The culmination of cultivated ignorance by Republican leaders, at least since Newt Gingrich, it’s the whirlwind they reaped, their fleas from lying down with dogs. MAGA, indeed.
It’s Trumpists’ legacy, too; including those who write to me, slavishly repeating his lies. Even more than Trump, they shame America. And themselves. Maybe Trump’s insurrection will awaken enough Republicans to the damage they’ve facilitated, helping to assure someone like him will never again sit behind the Resolute Desk.
In Congress Wednesday night, after Trump disgraced himself and our nation, it almost seemed like it might. Sudden sententiousness, after years of ignoring the obvious.
at January 07, 2021