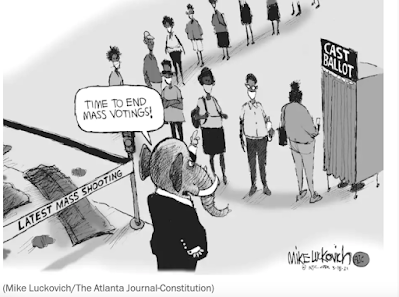 Two weeks, two mass murders using America’s massacre weapon of choice; at least one of which was purchased only six days before putting it to the only use for which it was designed. And ten days after a judge, adjudicating a lawsuit filed by the NRA, struck down a ban on its sales in Boulder, where the most recent murders occurred.
Last year was one of our deadliest ever for gun violence. Nothing will change, of course, as long as senators like Ted Cruz resort to the usual “Democrats want to take all guns from everyone” falsehoods, as he did this week. Nor as long as the NRA contributes millions in campaign donations, 98.1% of which, in 2020, went to Republicans. When Cruz began his deluge of deceit with “Every time there’s a mass shooting…” a lot more was revealed than he intended about America’s exceptional production and tolerance of slaughter by combat-style weaponry.
Also making a strong bid for the hearing’s b.s. prize was Louisiana’s Senator Kennedy, who equated restrictions on gun purchases with banning all law-abiding citizens from driving in order to stop drunk ones. It shouldn’t need explaining how dishonest and, if he believes it, stupid that is.
Rather than repeating calls for a minimal amount of sanity, which will inevitably fall upon filibustered ears, let’s talk about the lying that’s come to characterize the right side of our political spectrum, and not just about gun-control.
As a starting point, consider Trump-hired election-cancelation attorney Sidney (embarrassing, right?) Powell. Splattered like blood over the crime scene of right-wing media, her high-volume claims that Dominion Voting Systems conspired to steal the election from Trump, led to being named in a billion-dollar lawsuit by the defamed company. Her novel defense could become the template for all the liars up with whom we’ve had to put since the election of Trump. Especially Trump.
And it should definitely supplant the ever-changing definition of “chutzpah,” the most recent iteration of which was Trump referring to House Democrats as “do-nothing” after Moscow Mitch spiked every bill they produced.
Strap yourselves in, dear readers. Here it comes, in a filing to the court by her lawyers: "No reasonable person would conclude that the statements were truly statements of fact…” In other words, they argue, she can’t be held to account because her lies were so ridiculous that “reasonable” people would know she was blowing smoke up their assumptions.
Well, it’s bold. But here’s the thing: I knew, and I’d guess most people reading this did, too. Trumpists didn’t, though, and they still number in the millions. Sid-the-other’s prevarication was aimed straight at them, and, accustomed to devouring mendacity un-masticated, manna from the heaven-sent, they gorged on it. Stormed the capitol over it. Refuse over it, even now, to admit President Biden was legitimately elected. Which is why it’s necessary, contra a recent letter, to keep calling out Trumpism: like the carcinogens he deregulated, the poison remains, and will for decades.
Were Ms. Powell’s lies any more grievous than Trump’s about the election, the pandemic, climate change, immigrants, Democrats and socialism, China, Russia, and every other word that caused his lips to move? By no measure. One assumes her lawyers would argue he’s off the hook, too. Not his fault his followers aren’t “reasonable” people.
Among Republicans there’s rarely a political cost for lies as effluvious as Powell’s, Cruz’s, Kennedy’s, and Trump’s. In fact, they’re what keep getting them elected. And now we’re to believe there should be no legal consequences, either, because no one but idiots – their idiots, they’re confirming -- would believe. We may well see the theory tested in the coming months and years. When the full measure of Trump’s corruption is revealed, along with that of those he extracted from the swamp and sluiced into his “administration,” will his followers come to recognize how badly and cynically they’d been deceived? We should live so long.
Like those about Covid-19, Trumpist’s voting fabrications are existentially dangerous, and yet another definition of chutzpah: lying for months about the ubiquity of fraud, specifically and intentionally to destroy confidence in the process, they justify their newly-hatched, nationwide voter-suppression laws by saying confidence needs to be restored.
HR-1 is the bill written by House Democrats to ensure election fairness. Knowing they can’t win when it’s as easy for Democratic constituencies to vote as it is for theirs, Republicans will make it another victim of the fairnessbuster, while Ted Cruz, true to form, lies about it.
Equitable election laws and reasonable gun-control: prevented by Republicans since ink dried on the quills. The devolution continues.
at March 25, 2021