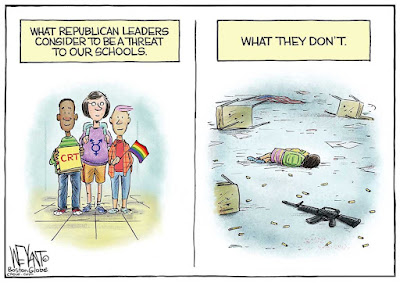 Admittedly micturition into the mistral, it’s impossible not to write about America becoming the only country in the world where guns are the leading cause of childhood mortality, and being the world leader in mass murders.
Because we have more guns in circulation than there are people, the barn is out of the bag. Nevertheless, whatever legislation might become law, no one is “coming for your guns.” Kamala Harris won’t march up your driveway and wrestle away your AR. If assault-style weapons were outlawed again (unlikely), they’ll still be out there. On the other hand, the teenage Texas terrorist had just purchased his; if the legal age were twenty-one, he couldn’t have. Legally, anyway. And there were many “red flags” about his prior behavior.
Here’s a partial list, in order of decreasing likelihood of passage, of legislation that might reduce the number of children giving their lives to protect your Second Amendment freedoms:
Red flag laws; raising the age to purchase military-style weapons; universal background checks; banning gravity; licensing of owners; mandatory training; limiting magazine size; banning assault-style weapons; amending the Second Amendment to eliminate ambiguity regarding “well-regulated militia”; beating swords into plowshares.
But nothing will happen until the Senate is rid of its hypocritical, gaslighting, scourge of NRA-owned “conservatives.” Which will occur only if the generation that includes those nineteen now-dead Texas children outlives the many ways errant Republican lawmakers are trying to kill them. And survives long enough to elect reasonable people.
“Reasonable” means responsive to the 90% of Americans, including many of their own, who favor some form of gun-control legislation. “Reasonable” means senators who value their constituents more than NRA money.
So, while we wait, let’s recount the worn-out excuses and ridiculous arguments produced by wholly-owned Republican enablers. Topping the list is the only cogent argument we’ve heard for keeping and bearing an AR-15. Offered by Senator Doctor Cassidy of Louisiana, it’s to kill feral pigs. Makes splendid sense.
Not far behind is the faux (pronounced “Fox”) outrage over President Biden “politicizing” tragedy when he spoke about the Texas murders. This, from people for whom there’s never a right time, who’ve politicized gun rights above all, and who’ve evidently forgotten, because of a recent four-year exception, that a president’s job description includes moral leader.
Junior Trump blames massacres on “crazy teachers” indoctrinating our kids. Evidently, though, like most gunophilic Republicans, he’s fine with arming them. Senator Ron Johnson blames Critical Race Theory, wokeness, and “liberal indoctrination,” which “have been going on under the radar for quite some time.”
A favorite Republican “guns aren’t the problem” dodge is mental health. Right. The first bill Trump signed revoked Obama-era regulations making it harder for mentally ill people to obtain firearms. And, having signed several bills that loosened gun laws, Greg Abbott, governor of Texas, which ranks last among states in access to mental health care, cut $211 million of funding for it. It’s a diversional talking point, not an action item.
Schools ARE acting, but they need help. In blue Washington, the legislature provides mental health funds. Will red states follow suit?
Insurrectionist Rep. Mo Brooks rejects gun safety laws because “we always have the right to take back our government should it become dictatorial.” Sure. Thousands of times over, our government outguns us. Should it become dictatorial, it’d unhesitatingly turn that firepower on us. Under Trump, it almost was and almost did.
We don’t need new laws, they say. We need to enforce the ones already in place. Because of Republican senatorial obstruction, the ATF hasn’t had a confirmed director for sixteen years.
After the Texas slaughter, Senate Republicans (the free speech party) blocked debate on a bill addressing domestic terrorism. Why? Do they consider domestic terrorists their base? After the bloodbath, Michigan’s legislative Republicans (the free speech party) blocked Democrats from speaking about it. So one of them spoke from home. Please listen to her.
Speaking at the NRA convention in Houston, three days after the Constitutionally-protected carnage, Trump called gun control legislation “grotesque” and “cynical.” Weapons, per usual and unironically, were banned from the venue. And here’s more depressing Americana (warning: includes Ted Cruz offloading bovine-excrement).
Even more: Republicans have consistently blocked funding for research on gun violence. Perhaps it’s because of studies like the one finding no benefit from arming school employees.
Celebrated by both sides for crushing Trump’s pick for Georgia governor (Trump is claiming fraud, of course), Brian Kemp checks every gun-nut, hardcore, right-wing box.
Will elected Republicans ever accept democracy and listen to the ninety percent? When and if I regain breath, I won’t be holding it.
at June 01, 2022