I've always thought the idea that the media are excessively "liberal" was mostly foolish. Lazy and stupid, credulous and superficial? Definitely. Especially television. In newspapers it's still possible to find in-depth coverage of complicated and unsexy issues. Which is why our coffee table is overflowing with the residua of the three papers to which we subscribe. The New York Times, despite occasional misfires, remains a bastion of broad and deep and thorough coverage.

I also subscribe to the famous Colbert quote that "reality has a well-known liberal bias."

Anyhow, in the above context I find this graphic interesting: 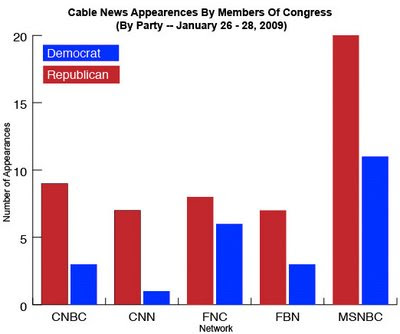 These were the days leading up to the votes on the stimulus bill. And lookie there: who has the most balanced appearances?

Not that any of it was useful. I'd have much preferred to hear real discussions of the pros and cons of tax cuts and infrastructure spending, by people who actually study those things. What we heard was congresspeople -- by far mostly Republicans -- spouting the usual party tropes with no real elucidation.

Meanwhile, I sense a trend. For some reason the television "news" media seem to think now is the time to show their lack of bias, and to do so by giving preference to the right wing. It's taking that old idea that "balance" requires giving equal time to opposite opinions, even if one is demonstrably wrong, and carrying it over the cliff.

That's the liberal media for ya. Rant on, Bill. It's working.