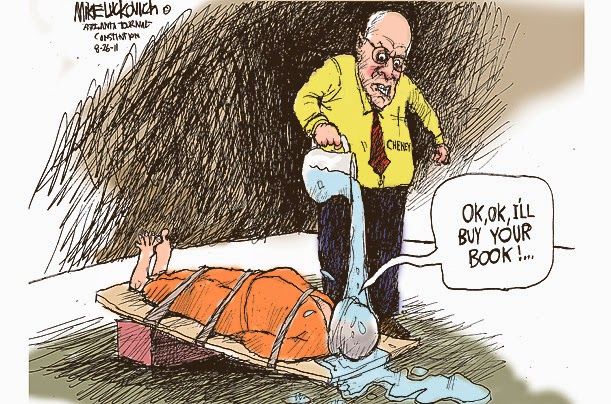 Read Charles P. Pierce on the US torture program:

... For years, our herd immunity on these matters consisted of a general consensus that there were some things that the United States simply could not do and remain the country we told ourselves and the world that we were. We believed that there were things that were unthinkable, and that kept us at least partly safe from an outbreak of our worst impulses. That herd immunity will not be rebuilt easily. It will take a steady intellectual and political inoculation against the worst in us all. And we must contain the spread of the infection as best we can, and not listen to those people who tell us that what always has worked in the past for us endangers us now.

Dick Cheney, the anthropomorphism of the word "abomination," remains a hero to our far-right wing, trotted out regularly on their Bolshivekian, propagandistic airwaves and allowed to excrete his poison at will. The shame is all of ours, but not all of us are at fault. That designation remains the sole property of those freedom-loving Americans with teabags on their hats and Foxolimbeckian offal in their brains.