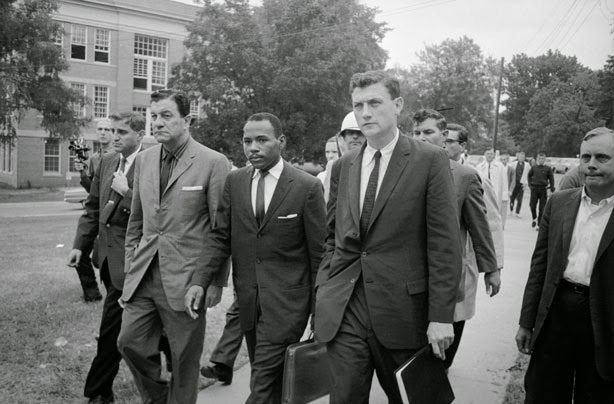 John Doar (to James Meridith's left in the pic) has died. It might well not be a familiar name, in which case, read Charlie, whose tribute ends thus:

...Quite simply, there was no braver American amid the tumult of the 1960's and the 1970's than John Doar. Arguably, there were very few greater Americans during that same time. He made the law a shield, and then he made the law a sword, and he stood in against the most dangerous beasts in this country's heart and beat them all. He never wrote a book. He did not become the star he could have become. (Almost everyone else involved in Watergate did, god knows.) And, last Tuesday, he died, at the age of 92. When that smiling dunce, Reagan, got up at his first inaugural, and said that government was the problem, when he told that stupid Rotary Club joke about "I'm from the government and I'm here to help," I always thought about John Doar, who was from the government, and who came to help, and who did more for this country in three years down South than Reagan did in his entire sorry life. There is one thing more you should know about John Doar.

He was a Republican.

Every modern Republican should be ashamed of themselves because of that.

[Image from the referenced essay]