Trump, Pence, And The Right To Choose 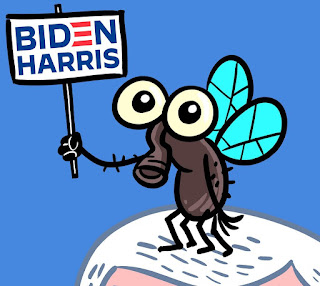 Said the person hanging from a fly's belly during this week's VP debate, "President Trump and I trust the American people to make choices in the best interests of their health."

Well, then, why not the same regarding a woman's right to choose what's in the best interests of her reproductive health? Because there's another human life involved? But aren't other human lives involved in a person's choice not to wear a mask? Lives of fully-formed people, the timing of whose "personhood" isn't subject to question, scientific, religious, or otherwise?

In other words, what Pence said (and to which, inexplicably, God didn't respond with a lightning bolt to his wizened heart) was a load of hypocritical bullshit. Which, admittedly, is entirely on-brand.