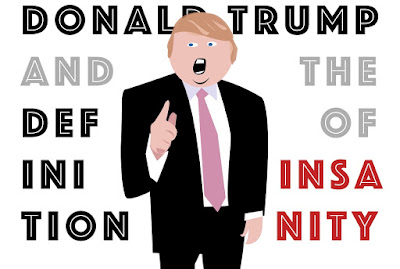 It wasn’t Einstein who said, "Insanity is doing the same thing over and over again and expecting different results." It was mystery novelist Rita Mae Brown. You can look it up. I have, many times. Keeps coming up different.
Here’s a more timely definition: “Insanity is observing Trump’s behavior and insisting he’s sane.” The politically and clinically insane may disagree, but claiming he won by a landslide, that he has indisputable proof while producing none -- what else is there to call it? He’s been twentyfifthamendable for months. Even for Trump, to whose daily dose of dishonesty we’ve become dulled, this is unraveling incoherence. One needn’t be an Einstein or a novelist.
If only the Supreme Court had agreed to hear his sixtieth losing argument, Trump says, he could have presented the evidence. Really? He couldn’t send his lawyer-like hybrid, Rudney Powliani, back to Four Seasons Landscaping to lay it out, ream by convincing ream, solid as a concrete birdbath? No court order prevents it. Like the “amazing” things his “investigators” found in “Hawaii,” where did it go? Insistence is insanity. His and his cultists’.
Joe Biden won by nearly eight million votes. Confirming Trump’s “landslide,” which he claims both in ballots and the Electoral College, then, would require proving twice as many votes were fraudulent (disallow Biden’s margin and they’d only be tied). Did Trump lose the data in a sand trap?
Like Covid-19, Trump’s madness is infectious, and he’s a superspreader of both. Witness Congress’ dumbest lawmaker, Louie Gohmert: along with several similarly blighted members of the deep-end state, he filed a lawsuit against ski-vacationing-during-Covid’s-deadliest-month, absent-coronavirus-task-force-leader, Mike Pence, in the court of a Trump-appointed federal judge. It demands a ruling that Pence has the authority to reject all non-Trump votes when Congress meets on January 6th to certify the election. It further demands that the judge orders Pence to do so.
Incredible. Do even the most Foxified Trumpists think, after enduring months of annoying campaign ads, predicting a lib-owning, God-produced landslide, wearing “F… Your Feelings” t-shirts, that that’s how it should work? That, in America, a semi-elected vice-president – overruling voters -- can bend the electoral outcome to whatever he/she wants? Louie does, and he keeps getting reelected. By exceptional American inmates of the asylum.
To recognize insanity, sanity is required. Which explains why so many Trumpists, infected beyond their ability to recognize it, accept and parrot his lies. How many times, for example, have we heard them declaim Trump’s serially-debunked confabulation that there were two-hundred-thousand more votes cast in Pennsylvania than there are registered voters? (In fact, there were fraudulent votes in Pennsylvania. Three. For Trump. Two from the deceased, one from a guy who tried to vote twice. That’s it. That’s all.)
If his election delusions were the only manifestations of Trump’s tangled wiring, perhaps we’d only be amused, not concerned. But there’s more. Threatening retribution like a cornered mob boss, raving as if from a padded cell, he’s seeing enemies everywhere. Not the usual Democratic and journalistic suspects, either: Republican Senators, Governors, and Secretaries of State. Fox “news.” Pompeo, Meadows, Thune. White House Counsel Cipollone. Even shameless groveler and looming defendant, Mike Pence.
Psychopathically unable to accept his loss, Trump’s willing to prevent it by destroying faith in elections with his lies. Checked out of the fight against the virus, tweet-golfing, he’s offered no leadership to repair his mismanaged vaccine distribution. He called the economic relief package, negotiated by his own people, “a disgrace,” promising a veto for containing things he’d previously demanded. Uncaring about the impact on Americans, he changed his mind only when persuaded it could affect the outcome of Georgia’s senatorial runoff, about which he seems to care only marginally more.
Self-proclaimed greatest-ever supporter of our troops, Trump vetoed the National Defense Authorization Act; primarily, it can be presumed, because it clamps down on foreign and domestic shell corporations of which he and his family have made frequent tax-evading and other Stormy use.
Long before it happened, Trump’s cruel deterioration was predicted by those who know him best -- his ghost-writer, his bag-man, his niece, among others. Plus millions of non-Foxified Americans. With almost three weeks left for vengeance, he’s creating as much damage to as many people as possible, including calling for a “wild” uprising on January 6. Pitiful Ted Cruz and ambitious Josh Hawley just announced their intent to fuel the fire. Trump’s idolatrous cult is preparing to comply. Insanity begets insanity.
[Image source]
at December 31, 2020