Corporations Are People, My Friend 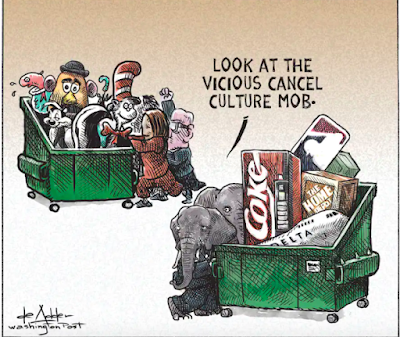 Not so many years ago, five-ninths of the Supreme Court informed us that money is speech and corporations are people. Shortly thereafter, finishing off, to the best of its ability, the remnants of governance by and for the people, the court, having experienced another 5-4 epiphany, declared racism over and lynched the Voting Rights Act.

These partisan rulings delighted Republicans, fulfilling their most liquid dreams; for it’s the subsequent deluge of corporate money, and being freed from federal oversight of naked suppression of voters of Democratic inclination, that has kept them in office ever since. Funny thing about that, though: their recent exuberant escalation of decades-long efforts has shone a light; if not on the money itself, then on the hypocrisy surrounding it.

The apotheosis, the sine-qua-non, the Platonic ideal of Republican subterfuge is Georgia’s, arising after their recent electoral defeats. Lacking – apparently not even wanting – a message to attract more voters to their side, they chose to narrow the avenues of access that had increased minority votes. And, more egregiously, to give their legislature the power to overturn unhappy results. But, they insist, it’s only about preventing widespread fraud (the big lie) and keeping illegal immigrants from voting (doesn’t happen). Paraphrasing a recent letter implying those very things, “huzzah for hysterics.”

Not everyone who saw what happened was okay with it.

In response to criticism came the “liberal lies,” “who-me,” cat-who-ate-the-canary-in-the-coal-mine disavowals; the counterfactual claims that they’d actually increased opportunities to vote; the “Fox said it, I believe it, that settles it” assertion that Colorado, to which MLB moved the all-star game, is just as restrictive. Repeated robotically by right-wing pundits and Trumpists, it’s false. The truth (remember truth?) is the opposite.

Then, the unexpected: several Georgia-based corporations, generally given to giving Republican, spoke out in criticism. “Spoke” is the operative word. Said it was wrong, didn’t actually do anything. But it was enough to cause apoplexy and consternation among rightists, self-styled protectors of free speech and corporate autonomy, and bulwarks against “cancel culture.” Immediately, their dudgeon turned to eleven, Georgia’s legislature voted to rescind a tax break for Delta Airlines: well-deserved punishment for the crime of firing off a high-capacity load of words.

Then, in Texas, as their legislature prepared even more oppressive restrictions aimed at minority voters, corporations based there also expressed pro-democracy opinions. Which let loose a flood of two-faced outrage, led by the heartless harbinger of hypocrisy himself, Moscow Mitch McConnell. There’ll be consequences, he warned, ominously but without specifying, for speaking their people-minds. Corporations should best stay out of politics, he intoned. Except, of course, for continuing to bankroll us, he added hurriedly, realizing too late what he’d just said. The money kind of corporate political activity is perfectly legal, he assured us, as if speaking out for democracy isn’t.

Having let slip his truth, he immediately tried to wiggle free. “Unartful,” he said. It was a hilarious episode, in a cephalexplosive kind of way.

So far, it’s only words. But corporate refusal to keep grubstaking Republicans, or, even more dramatic, were they to boeing-boeing away to other states, might be the only remaining recourse to right the wrongs. Democracy-loving voters in democracy-hating states are increasingly unable to do anything about it; which is the whole point.

Are corporations concluding there’s more profit in retaining customers than in purchasing legislators? Maybe. Politics beds strange fellows. The world has flipped on its axis: Republicans are yelling about corporations using political influence and Democrats are cheering them on.

Trump, of course, speaking about whom we’re informed ought to no longer be allowed, had to put in his two-kopeks-worth. Boycott, he demanded; something he was against when liberals suggested it. Cancel the lot of ‘em. Delta, Coca-Cola, UPS, MLB, and more.

But Trump is Trump. Always the faker and ever the cheat, he was caught, in a subsequent photo-op with Stephen Miller, the worst of his many in-house swamp-dwellers, trying to hide his extra-large bottle of Diet Coke. Also hilarious, in a “people actually voted for that guy” kind of way.

With Trump, there’s always more. We learned this week how he suckered credulous cultists into giving monthly or even weekly donations to his campaign, using fine print so small it was barely noticeable. Having bankrupted many people, including the sick and dying, his campaign was forced to return $122 million when the scam was uncovered. As usual, Trump got away unscathed.

Hey, here’s an idea: no matter the topic, every column should end like this one, with a “Trump revelation of the week” feature. Everyone would love it, right?