Infrastructure. Gotta Do It. 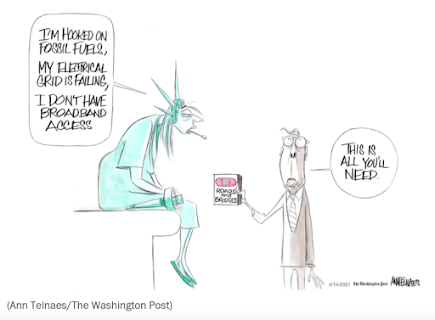 Rumor has it that Congressional Republicans will soon present their own infrastructure plan. If true, it’s a positive development, depending on what is and isn’t in it, and how they plan to pay for it. (Not by raising corporate taxes, they’ve already said.)

In any case, it'd be refreshing for a party that had, for decades, given up producing legislation of its own, other than military spending and limiting voting rights of Americans. It’s much easier and more attractive to their base, simply to decry and block, if they can, whatever Democrats produce. They did it during President Barack Obama’s administration, kept at it through Trump’s, and the production/block cycle continues today.

So far, the Republican response to President Biden’s wide-ranging plan has been to argue about the meaning of “infrastructure.” And, from Mitch McConnell, a promise that not a single Republican senator would vote for it; period, end of discussion. Which surprised exactly no one except, possibly, the President himself, who, like President Obama but perhaps less naively, still contends there’s a possibility of Republican helpfulness.
On the other hand, it was a gift: Mitch’s proclamation freed President Biden from wasting time trying to cajole cooperation from the right. And it makes coffee-out-nose-laughable the complaints, regularly heard on rightwing media, that Joe is forsaking his commitment to bipartisanship.
Sure, we could argue about what fits the definition of infrastructure. Setting aside South Dakota’s Republican Governor Kristi Noem’s forehead-fracturing claim that pipes and housing have nothing to do with it, one might question the inclusion of various items. But why? It is what it is: a much-needed, serious attempt to make up for precious lost time in addressing increasingly costly, previously neglected needs of our country.
To his credit, Trump campaigned, among other disingenuous promises, on rebuilding infrastructure. Who can count the number of disappearing “infrastructure weeks” he announced during his tenure? But at least it was Republican recognition that action has been too long in coming. Remember, it was the last of the honest and pragmatic Republican presidents, Dwight Eisenhower, who convinced Congress to pony up for the interstate highway system; making the case that it was a matter of national security. Which is a pillar of conservatism.
Aging dams and bridges are security threats, too. The same for an inadequate electric grid and unsafe water. Underfunded schools. Insufficient housing. Limited healthcare access and not caring for our elderly. And, maybe more than anything else, the climate change emergency, broiled in which we now find ourselves.
However we choose to label them, America has chronically neglected needs, and it’s way past time to address them. The longer we wait, the more it’ll cost, and the more likely is disaster to happen in the meantime. As with his pandemic relief plan, President Biden’s proposals for rebuilding America (which will actually MAGA) enjoy broad public support, even among Republican voters.
It’s not mysterious: most everyone has had to pay for needed repairs or upgrades; many have seen the consequences of delaying them. In our homes, for our families, we do what we must. In rejecting it, Congressional Rs would, yet again, flout the will of the people. And please countries hoping for America’s decline.
The problem, compounding hourly, is that rebuilding costs money. Staggering amounts of it. Far more, even, than President Biden is asking for. We all know it, and we know putting it off makes it worse. The only question is how to pay for it. And, no, dear Republicans, the answer isn’t another fairy-dust, trickle-down tax cut. Or a piper-postponing, bond-selling smokescreen. And, no, dear Democrats, the money can’t come entirely from corporations and millionaires.
President Biden ought to rescind his pledge about people making less than $400 thousand a year. Everyone drinks water, uses roads and electricity. And breathes. Plus, it’ll create millions of jobs. In fact, taking a page from the Republican bumper-sticker book, but honest and descriptive, it’s named “The American Jobs Plan.” Worth a read.
Not wanting to spend money doesn’t change the need. We do it to keep our families safe; we must do it for our country, too, which amounts to the same thing. China understands this, evidently better than we, as they build and pave their way past us, everywhere.
And now, the Trump story of the week: Saffron-spined Republican senators gave him a made-up award, titled like a Marvel comic, engraved on a tiny silver bowl. In gratitude, spewing his usual undead election lies and worse, he called Mitch McConnell a “dumb son of a bitch.”
Mitch McConnell isn’t dumb.
at April 16, 2021