God And Mitch (maybe not in that order) 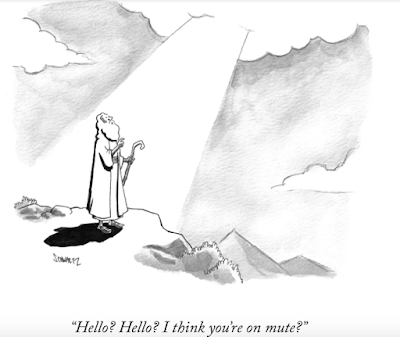 On Monday, Mitch McConnell unlimbered himself of the following bit of oracular wisdom: "I think it's highly unlikely — in fact, no, I don't think either party, if it were different from the president, would confirm a Supreme Court nominee in the middle of an election." He should know. In a rational world, his picture would appear in every dictionary in every language of every country on Earth, next to their word for “hypocrite.”
I’m told there are differences of opinion on the existence or nature of a creator of this universe; and, if there is such an entity, whether he/she/it/they resemble the God of the Bible or any of the thousand or so other gods and godettes in which people believe around the world. I’m not about to weigh in on the matter; however, there’s one compelling piece of evidence against the Judeo-Christian version: Mitch McConnell has not yet been rendered into ash by a bolt of lightning. Not even as he uttered those words. It’s not dispositive, but it does make a person think.
For Mitch, politics is a zero-sum game. Any lie, any eye-popping example of unabashed hypocrisy, any full reversal of a previous declaration is justified in service of his only goal: preservation of power. What’s best for our country is of no importance. If he has his way – and, with the help of Joe Manchin and Krysten Sinema, he most likely will – President Biden and Democrats won’t be able to pass any significant legislation of benefit even to his own constituents. No matter if – or, maybe, especially BECAUSE – a significant majority of Americans want it enacted.
If there’s any philosophical consistency to Mitch’s behavior and that of his party, it’s unwavering commitment to preventing a Democrat-led government from succeeding. In the states, it’s preventing a Democrat-led government from happening at all, no matter by what margin Democrats outnumber Republicans within their borders. Because, generally speaking, what comes from Democrats has always been good for the majority of Americans: child labor laws, workplace safety, health care, Social Security, and, were they to get their way, laws protecting equality of the franchise and rebuilding infrastructure.
The list is longer. Much longer than what Republicans have produced, ever since Saint Ronnie told us government is the problem. Were enough people to come to realize it, and if it came to pass that they understood what Trumpublicanism (even before Trump) has prevented or taken from them, voters would relegate that party to a historical anomaly.
So confident are Mitch and other leading lights the Republican Party of their success in befuddling and distracting their voters that they feel free to demean their greatest enemy: democracy itself. Openly. That's where we are: today’s Republicans, as far from their origins and historical icons as they could possibly be, are actively denouncing democracy while doing everything they can to eliminate its most sacrosanct protector; namely, fair elections.
Too strong? Here’s Senator Mike Lee of Utah, Tweetle-deeing: “Democracy isn't the objective; liberty, peace, and prospefity [sic] are. We want the human condition to flourish. [Really? Then how about some healthcare and anti-climate change legislation? How about helping people in poverty to flourish?] Rank democracy can thwart that.” RANK?? What does that even mean? Functioning? One in which the majority prevails?
Yep. Exactly. We know that because, not long after, along came Tweetle-dumb: “The idea of democracy and majority rule really is what goes against our history and what the country stands for.” Doctor (how embarrassing!) Rand Paul. Is who had that to say. And more: "The Jim Crow laws came out of democracy. That's what you get when a majority ignores the rights of others." It doesn’t get wronger than that. Like the voter suppression laws sprouting in red states like MAGA hats and Q flags, Jim Crow legislation was an attack on democracy, its absolute opposite, springing from fear of – what shall we call them? – RANK elections. Just more obvious and clumsy than modern efforts to protect monotone against a rising and inevitable tide of polychrome.
Much smarter and far more subtle than Trump, and still in power, Mitch McConnell understands the future of his party depends on finding ways to keep the “wrong” people from voting, and to keep “his” people from accepting the results when the majority prevails. He knows his efforts, and those of red state leaders, to disenfranchise citizens who hold the power to run them out of office will eventually find their way to the Supreme Court.
Which makes the reasons for that statement, above, as clear as those patches of empty lawn on the National Mall, January 20, 2017.
[Image source]
at June 16, 2021