Meating Of The Minds 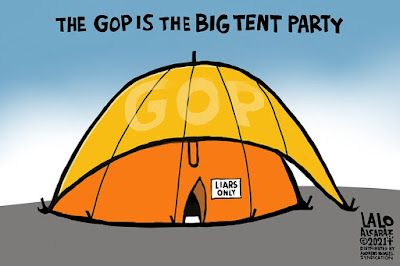 Not all Trumpublicans are brainwashed. Some are the ones doing it. It’s a question of which came first, the chicken or a horse of a different color.
Many scientific studies have confirmed that liberals and conservatives process information differently: reactions to tense situations; response to facts that disprove beliefs; which parts of the brain light up on scans when seeing stressful images. Consistently, they show that liberals tend to respond more rationally, more evidence-based.
Published in “Science Advances,” titled “Conservatives’ susceptibility to political misperceptions,” the latest such study summarizes, in part, thus: “… Results confirm that conservatives … perform worse at distinguishing truth and falsehoods. This is partially explained by the fact that the most widely shared falsehoods tend to promote conservative positions, while corresponding truths typically favor liberals…” [think climate change, election fraud, adenochrome, vaccines, “fake” vs. fake, BLM.]
Only hardcore science and statistics nerds will plow through it. Even more improbable is that people who should see it, will; much less give it serious consideration. But, by methods careful and transparent, the findings are well-supported. Given the unabashed preference for spreading and receiving falsehoods that characterize today’s Republican Party, tightly bound to Trumpism, the findings aren’t unexpected. It’s doubtful they’re remediable. Which makes trying for “bipartisanship” a fool’s game.
An intriguing enigma remains: is this democracy-threatening dupability the cause or effect of nonstop disinformation? Did the decades-ago founding purveyors of it, like Gingrich aping Goebbels, deliberately create gullibility by bombarding their followers with so much untruth that they became unable to distinguish it? Or, like Karl Rove, did they recognize the preexisting defect in certain conservatives’ judgment, then exploit it for power and wealth?
Maybe it doesn’t matter. But if this blindness is connate, not created, reversal is fantasy. Either way, with deception being prevalent for so long, enlightenment seems unobtainable. Weirdly, the optimistic view is that what we’re witnessing, namely the majority of Republicans believing Trump’s election lies and other laughable but unfunny falsehoods, sprang from intentional manipulation by unscrupulous, democracy-rejecting, lower-sphincter-adjacents. At least that would suggest the possibility of rehabilitation.
Among other doubtful occurrences, though, it’d require old-school, honest conservatives regaining ascendency in their party. It’d require more Republicans (and two pudding-brained senatorial DINOs) choosing country over clout. And it’d require enough Trumpists to recognize that every piece of legislation beneficial to them is being blocked by the powers behind their own party. Which, in turn, would mean overcoming their mysterious inability to discern lies. Not likely.
For today's Republican leadership, still prostrate before Trump, afraid of the radicalized, conspiracy-believing base they so painstakingly created, there’s too much at stake to let it happen. Because they have no positive agenda, and, given Trump’s failures, particularly with but not limited to his response to Covid-19, they’re determined to change the subject, by manipulating the aforementioned vulnerability. The insurrection wasn’t. Or was liberals in disguise. Or, as described with a knowing smirk by “President” Putin, to whom Trump consistently kowtowed, the insurrectionists were simply “making political requests” for which they’re being unjustly prosecuted. Right. Putin, Trump, Fox, OAN, and Newsmax.
Because a party without policy needs diversionary scapegoats, Dr. Fauci is their latest Hillary Clinton. He, not Trump, bears responsibility for America’s nearly six-hundred-thousand pandemic deaths. Waving the fascist playbook like Trump’s Lafayette Square Bible, Junior Trump joked about murdering him. Trump himself said there’s worse coming. Let’s not only forget Trump’s lies and inattention, his mismanagement, his mockery of people who cared. Let’s also erase his pulling CDC experts out of China before the pandemic, as part of his ineffective “tough on China” posturing.
Another example: Because President Biden’s rescue plan actually decreased economic stress and food insecurity by forty percent, Republicans have supporters focusing on people still not working. How can such unquestioning acceptance of misdirection be overcome?
Resurrecting his “Shower Me with Adulation” claimbakes for the wool-eyed, Trump, when not lying about the man who defeated him sound and certified, teleprompted these words last weekend: “The survival of America depends on our ability to elect Republicans at every level, starting with the midterms next year.”
He’s right. If, by “America,” he means the country where not all citizens have equal access to voting. Where the needs and political preferences of the majority are quashed. Where the means of escape from poverty are repeatedly blocked, lest taxes be raised on people who never experienced it and don’t care. Where lies are truth and the mysterious inability to divine the difference is explicitly employed, by their leaders and media stars, to benefit the wealthy few who control Trump’s Republican party.
[Image source]
at June 10, 2021

Email ThisBlogThis!Share to TwitterShare to FacebookShare to Pinterest
Labels: conservatives and disinformation, difference between liberals and conservatives, Fauci scapegoat, Putin on insurrection