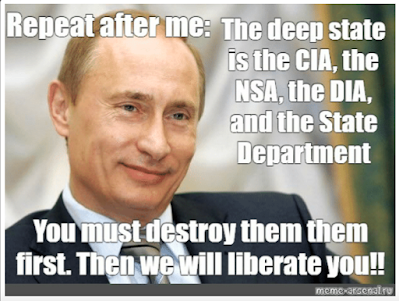 "Unindicted co-conspirators." Makes a person think. If by "think" one means "completely mischaracterize the concept." When used in a DOJ report on January's insurrection, it made Tucker Carlson "think" of the FBI. "Incredible bombshell," he called it. After which, several Republican loonies in Congress gobbled it up like orange wedges at a kids' soccer match.
To Tucker “Starts-with-T-but-there-are-alternatives” Carlson, the term could only mean Trump’s anti-American insurrection was an FBI operation. To people able to maintain contact with reality, though, it more likely refers to seditionists who laid plans but for which there’s currently inadequate evidence to indict; or to those who stoked anger to murderous levels on the morning of. Mo Brooks, Rudy Giuliani, Ted Cruz, for examples. And, of course, the outvoted “president.” That’s how Nixon was described, after all, back when gates stopped being just things that open and close.
To rationalize their anti-democracy voter suppression laws (because fair elections would doom them, R senators just blocked even discussion, much less a vote, on the For the People Act), Republicans must keep alive the myth of massive election fraud. To keep the lie Trumpophilically credible, they’re morphing the murderous insurrection it engendered into something innocent; or created by deep-state agents, or liberals; or which never happened at all.
What other explanation is there for the Republican representatives who voted against honoring the capitol police? If they didn’t honor them, it didn’t happen. If it didn’t happen, there’s no complicity for those peddling Trump’s big lie.
As to Tucker, they come for the conspiracies and stay for the lies. Who doubts that millions of the Trumpofoxified are buying his FBI connivance, after he repeated it, repeatedly?
Which raises an interesting question: if Tucker’s like-mindless Congress-dwellers believe his deep state confabulation, why vote against a commission to investigate? Wouldn’t they ride the wave of revealed, awful truth to perpetual power? To which the answer can only be, they don’t.
What they do believe, then, is that Trumpublicans can be convinced of anything; so they keep them hot, bothered, ignorant of, and distracted from their real, deep six agenda. By what evidence can anyone say they’re wrong?
They’re not. One needs no more proof than “ItalyGate,” their most recent gate swinging off its hinges, pushed, among others, by a woman sitting for an interview while squatting, unknown to the owner, in a thirty-million-dollar mansion she claimed was hers. Not far enough off, though, to prevent Mark Meadows, Trump’s former chief of staff, from asking the DOJ to look into it.
Because who wouldn’t believe an Italian defense contractor collaborated with the US Embassy in Rome, to beam advanced (alien?) satellite technology into voting machines, stealing millions of Trump votes. Totally real. Real as hacking into machines that aren’t online. From outer space. Real as Jewish space lasers combusting California’s forests.
But not as real as how close Trump brought us to losing it all. Because behind the noise, the deliberate drum of disinformation dispersed by devious deceivers, are disturbing details. Whether getting the Department of Justice to spy on members of Congress and reporters and even his own people, or pressuring it to find non-existent election fraud, he did his best to make the DOJ and, it’s being reported, even the FCC, his personal investigatory and punishment agencies. Like the KGB, Stasi, Gestapo, and OVRA, used by the dictators he so admires to keep their subjects in line and living in fear.
How close? Attorney General Barr willingly mischaracterized the Mueller Report, squelched prosecutorial investigations into Trump’s criminality, resumed the domestic data-gathering at which even Jeff Sessions had finally balked, and let Trump’s criminal enablers, like Roger Stone and Michael Flynn, off the hook. But lying about manifestly absent election fraud was evidently an abridgment too far, even for him, despite his prior eagerness to politicize his department. After failing to confirm Trump’s big lie, he was gone. His successor, pressured by Trump to appoint special counsels to find it, slow-walked it. That close.
As Trumpists keep believing conspiracies egested by their favorite fabulists, and as unscrupulous pushers of them keep getting elected, there are ever fewer people on the right with the integrity and rationality required to protect the Republic. No matter how long he’s been “gone,” Trump’s treachery lives on. Thanks in no small part to Tucker’s anti-American, self-enriching shtick, Vladimir Putin polls higher than President Biden among Trumpists.
First, Russia had Trump. Now it’s Carlson. As he and his believers tear down America, in the Kremlin it’s high fives all around. We're left to wonder if #ucker is in on it.
[Image source]