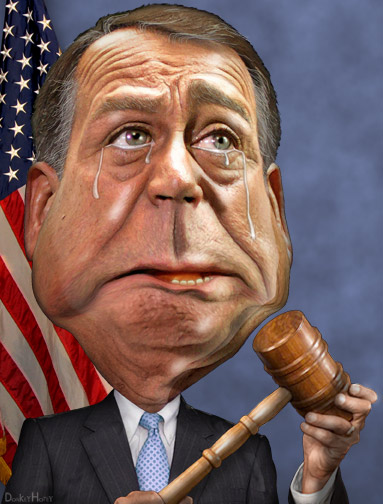 Anyone remember when, after Rs took control of the House, they said "The adults are in charge now"? When they asked us to watch how well they can govern?

Yeah, me too. Not only were they able to do not much more than produce about fifty flaccid votes to repeal the ACA, demonstrating to all who chose to look (which excludes the Foxified, of course) that they're pulling from an empty quiver, they've now taken it down to the next level of destructiveness. Boehner is gone, or will be, he says, soon. The lunatics are now in charge, if not in control.

In a world where all people could see with their eyes, hear with their ears, and think with their brains, this would foretell the end of their majority, in both houses, because their recalitrant idiocy would be obvious and undeniable. Not that it hasn't been from the beginning; but maybe now even the averager Republican voter would be able to see it.

But this isn't that world. In the halls of the hateful, there'll be nothing but rejoicing, as they see the opportunity to grind everything to a halt, pending the rapture.