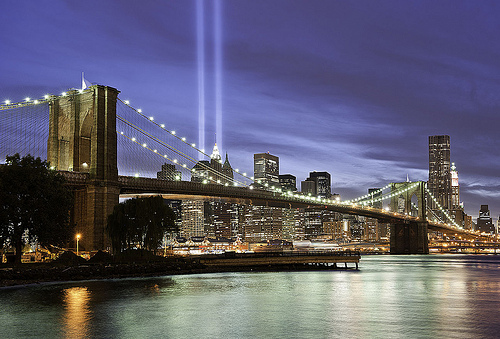 Here's my latest newspaper column (which some might recognize as an updated version of a prior post):

It's easy to recall the horror of 9/11 when it happened, the disbelief, the shock, the realization, as I watched, that people were dying, thousands of them. The sense that things had changed, irrevocably, forever.
I was impressed with George Bush with his megaphone at ground zero, supported the action in Afghanistan, noted how quickly the Taliban were vanquished and hoped it would resonate around the Muslim world.

And then, as 9/11 became an excuse to push a neoconservative agenda, as it became a way to rescue a presidency already foundering after a mere nine months, it all changed. Iraq happened, torture happened, “with us or with the terrorists” happened, Afghanistan was abandoned, 9/11 became a tool for politicization, mongering fear for political advantage. Cheney and Bush turned the potential unity of purpose that nearly emerged after the attacks into divisiveness and hatred among ourselves. (Cheney’s still at it.) If you didn't love the invasion of Iraq, if you didn't love torture and detentions and renditions, if you didn't hate Muslim Americans and their mosques, you hated America. You were “soft on terror.”

The memory of 9/11 became, like so much else in the right-wing armamentarium, a breeder of disinformation and blatant manipulation
Yes, I remember; and like other memorializations of our history, of sacrifice (actual sacrifice, like those who died, who tried to help, who did help) I am moved. But now, I'm also tired. I'm tired of the hypocrisy, of the delusion that stopping for a moment, for leaving a bouquet somewhere, for welling up and moving on, is actually meaningful. Mostly, I feel a sense of being manipulated. Bludgeoned. Never forget, they say. So we'll do what? Invade another country? Declare another liberal to be an America-hater? Watch another political ad use those images to hide an agenda? Ask us to support our troops while doing nothing to support our troops?

I honor those who died on 9/11, those who did so for no reason at all and those who went to the towers on purpose, to save lives. After the attack, I know that we still need increased security. I wish "sacrifice" meant something other than going shopping, as George Bush urged after the attack. I wish Republicans weren’t still blocking medical funds for those first responders.

And I wish the smarmy memorials, the florid TV coverage of the anniversary would stop, because I see it as cynical rating-grabs, and, for politicians, as vote-gets. What we need, in response to 9/11, is not slickly produced montages. What we need is to remember what democracy is, to realize that what has kept us strong is our diversity, our invention, our willingness to incorporate differing views, to find compromise, and, when necessary, actually to sacrifice, all of the country, as has happened many times in our history but not for a minute after 9/11, other than by our troops; to do without for a while, to help each other when we can, to heave to a common need. In the aftermath of 9/11, the first real attack on American soil, we've come to do the opposite. And it's been deliberate, a political ploy by the most cynical among us, to divide and conquer, to find scapegoats, to distract from the selfish agenda that's really at the heart of their manipulations. They saw 9/11 as opportunity, and they've taken it.

There's another aspect of these memorials, too: it sometimes seems that the more we wallow, the more the terrorists can admire their work, remember how much damage they did, how it changed us for the worse. Other than the need to acknowledge those who died, I find myself wondering how it'd be if we stopped the memorials altogether, the endless manipulation of emotion by people who actually couldn't care less for the needs of those they're fooling for political gain. Since 9/11/01, our needs are obvious. How about addressing and resolving them, in the spirit that existed for a moment or two back then, now co-opted and turned into the opposite of itself?

Me? Cynical? Well, I just listened to Sarah Palin screech her word salad at the rally for war, and to Ted Cruz and Donald Trump, and I feel sick.