Thank You, Sir. May We Have Another? 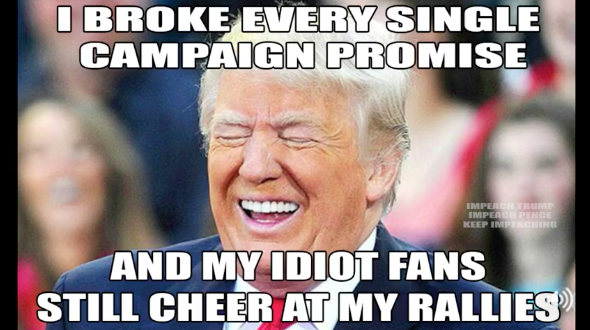 
Surely no one believes the thirteen white male Republican senators who scrabbled together their version of Trumpcare, in secret, thought even for a moment about doing the most good for the most Americans. Could anyone who sees the result think they discussed its impact on the people who’ve benefitted most from the Patient Protection and Affordable Care Act? On older Americans whose premiums will skyrocket? The chronically ill, the working poor. If it was considered, it must have been only to dismiss it. Such callousness can’t be unintentional.

Trump promised lower premiums, lower deductibles, better coverage. Not in the bill, of course, because without “Medicare for All” it’s impossible. (If he didn’t know that, why not? If voters believed him, why?) He promised he’d raise taxes on people like himself and lower them on everyone else. He won’t. In fact, whereas the worst effects on average citizens in the Senate wealthcare bill don’t kick in till after the next election, its tax giveaways to their paymasters are retroactive. If it fails, McConnell warns his party, we’d have to work with Democrats. That says it all.

One answer is found in Trump’s latest “festoon me with your love as I speak of my wonderfulness” rally: because they can.

Presidential lies and legislative gifts to wealthy donors at the expense of regular citizens won’t stop unless their voters demand it; but evidence suggests those people prefer being lied to. Since his electoral college victory, Trump has done so, on average, more than twice a day. Challenged to prove it by his faithful, I’ve directed them to sources where hundreds are catalogued. Without reading it, they reject the documentation, solidifying their commitment to remaining uninformed.

Evidently the pleasure of jeering reporters and denigrating people unlike themselves makes up for what’s being taken away from them. Their leaders know this and appear quite happy to oblige.