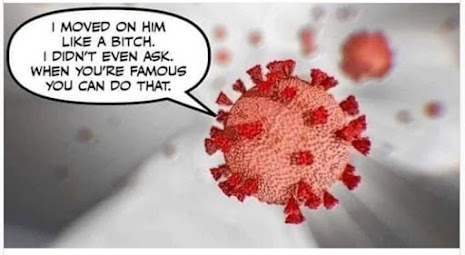 “Give me liberty or give me death,” said Patrick Henry. Nathan Hale expressed willingness to die for a greater cause this way: “I only regret that I have but one life to give for my country.” In Trump’s White House, it’s “Hail Trumpus, we who are about to die salute you.” Risking death for a far lesser cause, a self-serving, vindictive narcissist, they could die for an image-above-all charade. It’s home, roosting. Reality having penetrated the newly-reinforced White House wall, Trump and his morituri are attempting to do what sages know is impossible: polish a [rhymes with “bird”].
“I had to confront [the virus] so the American people stopped being afraid of it so we could deal with it responsibly,” said Trump. Right. Like calling to “liberate” states that were dealing with it responsibly. Like attacking their governors, mocking people, including his own staff and his election opponent, for wearing masks and distancing. If it’s helpful to project calm in during a crisis, it’s deadly to display behaviors that make it worse. And threaten national security.
Reverentially, Trumpists praise his dereliction as courageous sacrifice: taking on the virus to save us from ourselves. (cf. John 3:16.) “Covid stood no chance against @realDonaldTrump,” worshipped Georgia’s Senator Loeffler, up for reelection. But wait, there’s more! For a bargain C-note, you can buy a limited-edition, commemorative golden coin: “HISTORIC MOMENTS IN HISTORY: PRESIDENT DONALD J TRUMP DEFEATS COVID,” shouts the website. Flushed from the White House balcony like a bird-rhyme, a fascist-echoing video appeared, with triumphal music, featuring the heavy-breathing hero, glowering and posing like Mussolini.
And they produced photographs of Trump, taken ten minutes apart in separate rooms at Walter Reed, differently attired but with the same props, signing a blank piece of paper. “Governing!” Metaphor, if ever there was.
“Does anyone else find it odd that no prominent Democrats have had the virus …,” queried a Republican congressional hopeful. Uh, no? Further flaunting her conservative chops, she twitted, “Trump was fine until the debate, where they set up microphones & podiums for him… I put nothing past the left.” Her party’s swamp overflows with insanity.
Discharged, Trump bragged about his treatment as if he developed it himself, bustling beakers and Bunsen burners in a barricaded basement, next to the cheeseburger dispenser and single-channel TV. It’ll be the same for a vaccine.
Deserving of mockery as this is, it’s deadly serious. We, Trump, and his Rosy Gardeners are where we are because of a “president” who accepts no responsibility in the fight; who’s psychologically unable to address it effectively, fearing “looking weak” by wearing a mask. Thousands of unnecessary deaths? A small price for maintaining appearances.
Some hoped Trump’s illness would lead to acknowledging how serious the virus is, that minimizing it was wrong. Telling people to follow those guidelines he aggressively ignored. Nope. It made him worse.
Ignoring two-hundred-twelve-thousand dead Americans and their grieving families, having received an experimental treatment unavailable to the rest of us, availing himself of science he contravenes and healthcare he’s suing to take away from millions, he brays, still unmasked, “Don’t fear the virus.” Which was after putting his Secret Service team at risk, demanding an egotistical drive-by to bask in the deification of the adoring throng, bearing witness, amassed as if at Lourdes. No amount of polishing…
Dexamethasone can get you high and/or create psychosis. Likely, that’s why Trump enthused that he feels better than twenty years ago. Hey, let’s all get the virus! Bless you, Donald, for leading the way. Meanwhile, go forth and govern in your chemical haze, more erratic than ever, while your White House refuses contact-tracing of your partygoers. That’s intentional, reckless endangerment. All to preserve the fiction of “presidential” competence.
Lessons pass unlearned. Mused the Wisconsin Republican Party treasurer: “If the leader of the free world can get this, I think it’s kind of silly for the rest of us to pretend a $3 handkerchief from Walmart is going to protect us.” Republican senators flew home, maskless, from a Covid-positive meeting. Another went to a fund-raiser while awaiting a test that turned out positive. Mrs. Mike loudly wore no mask at the VP debate.
Then Covid-struck Trump capriciously ended relief negotiations. A mob-style threat? “Vote me out, sleep in an alley”? Covid encephalitis? After markets dived, he sobered slightly, but his foggy finger is still on the button. Steroid high or not – who can tell? -- Trump is a multi-level public health hazard. Try polishing that. Can’t be done.
[Image source]
at October 08, 2020