Another Statement Of The Obvious 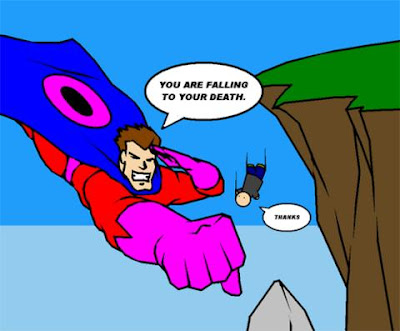 From a website with which I hadn't been familiar until a financial advisor linked me to it:

Talk about cutting off your nose to spite your face! It looks like the Republicans are going to get their pound(s) of flesh from the debt ceiling discussions. And the economically ignorant Democrats are going along for the ride. President Obama’s fundamental lack of understanding with regards to the current economic predicament in the USA (the balance sheet recession) is going to result in spending cuts in order to avoid the mythical insolvency of the USA. According to the Associated Press, the President is in talks to make a “significant” reduction in the size of the deficit...
...In short, these politicians have absolutely zero clue how the US monetary system actually functions. They have failed to properly diagnose our problems (a balance sheet recession) and are now implementing policy that will prove destructive. All in the name of a bankruptcy that can only happen if they decide to let it happen! So buckle up America. In their fight for power the politicians are about to “help” us avoid a technical bankruptcy while bankrupting us economically....
... If the United States implements a policy of austerity there is little doubt that the economy would continue to contract again, unemployment would increase and the economic malaise would worsen.

Seems balanced. Having said I'm not familiar with the site, called "Pragmatic Capitalism," I'll give it ricochet respectability by saying the guy who sent it to me is smart as hell about the economy; and I'll quote what they say about themselves:

This website was founded to provide investors with a totally unbiased professional perspective on Wall Street. We provide research, indicators, and news that the mainstream media leaves largely unnoticed. We have just one agenda at Pragmatic Capitalism: helping investors decipher information in a way that helps them create an investment plan that produces superior market returns. We don’t care for the bull side or the bear side – only the right side.

And, of course, they're saying what the vast majority of economists (as well as myself) have been saying: the R plans will be our ruin. They blame Obama's caving to their insanity on a fundamental misunderstanding of the economy. I can't argue with it; but -- at least based on what he said when he first spoke out for the stimulus -- I think the president does know what's needed. What drives me crazy is his reluctance to stand up and say what must be said, over and over, like the Rs do with the help of their propagandizing media noise machines. But in his case, he'd be telling the truth; and, most likely, with the rest of the media not caring.
President Obama's problem is he believes in democracy and the need for compromise; and the teabaggRs simply don't. That's what he fails to understand.