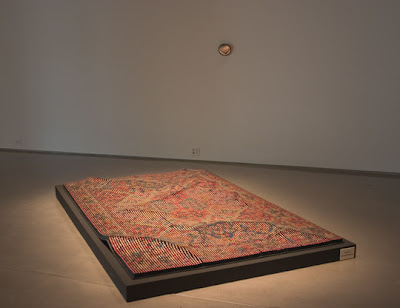 What is it with lying females and teabagger love?
As Sarah Palin, serial liar, plots the next way she can use her kids as props and then complain about media not leaving them alone, Michele Bachmann is on the rise, floating on the clouds of disinformation regularly steaming from her head. Like Palin's, Bachmann's lies cover the gamut from so silly and obvious that it makes you wonder why she bothers, to so outrageous that you wonder how she retains any credibility on anything from anyone; even teabaggers, you'd think, would have their limits. (Yeah. Sure. Right.)
Evidently not. She's their goddam hero. Heroette. Heroess. Hear. Oh?
Here's but a small sampling. It doesn't include such whoppers as those reeducation camps, but it does mention her fraudulent denial of income from her government-supported family farm; and it finishes off with her claim that under Obama there's been only one permit issued for oil drilling. (When she said it, the number was actually around 250. As she repeats it, it's over 300.) Bob Schieffer asked her directly about the falsehood last Sunday; she refused to answer, changed the subject, lied some more.
Here's another sort of wimpy list. And another. Reality-based people notice, and speculate:

When there is a misrepresentation of the truth, even if the tranmitter of said falsehood is unknowing of its false nature, then the recipient has been misled. But Michele Bachmann tells falsehoods as a matter of course, so it is difficult to believe that she could be so willfully blind to her own false comments, especially when the erroneous or false facets of her comments are constantly being brought to her attention by the media. Could it truly be that she does not know or understand that she is lying or spreading false information? Given her education and training in legal matters (she has a doctorate in Tax Law), although plausible, being oblivious or unknowing is incredibly difficult to believe.

It is more likely that Bachmann's ideology trumps her moral values, that promoting her evangelical right-wing political agenda supercedes everything else -- and that would include honesty.

Hard to know, isn't it? When people like Palin and Bachmann lie so easily and so constantly, you have to wonder what pathology is involved. Is it deliberate? If so, it says a hell of a lot about how they view their supporters (and even more about the supporters themselves). Maybe it's a form of sociopathy; as the writer says, they simply don't care and will say or do anything to get what they want. Whatever it is, it doesn't get at the most important question, which is this:
Why in the name of their god don't their supporters care? Do they love them in spite of the lies, or because of them? Or, because they're mostly viewers of Fox "news," which sells Sarachele like lemonade on a hot day, spins them like cotton candy, is it that they simply have no idea they're being lied to?

Irrelevant, probably. Teabaggers have long since loosed their hold on reality, if they ever had it. Truth simply is of no concern to them. Lying isn't a bug: it's a feature.
[Addendum: a friend forwarded this piece, more entertaining, as usual, than mine.]