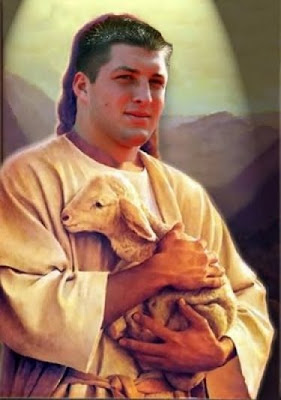 I don't doubt Tim Tebow is a nice guy, a godly guy. Seriously, I don't. After all, he reminds us of it every day, subtly, like a hammer. Yet, exactly because, shockingly unbiblical, he makes a public show of praying, he's become a hero, a paragon, to evangelicals. For lo, surely the winning football games of which he's been a part confirm the glory of god, the power of prayer, the undeniable rightness of everything in which they believe.
First and ten, sayeth the Lord.
God might ignore tens of millions of starving people around the world, or fail to answer the prayers of kids with cancer or end the ravages of epidemics, do nothing to stop wars fought in his name, but he calls one hell of a football game. For the one team, anyway. These wins are modern-day miracles, not unlike David v. Goliath.
Well, except that nothing important, no lives, no civilization is actually at stake, and that a football game is sort of small potatoes, compared to what else needs doing. Guess miracles aren't what they used to be. Something like grade inflation, I suppose. Or, maybe, god's tired of beating his head against the wall, taking a pass (as it were) on the hard stuff. I can relate: nowadays I spend much more time watching football than saving lives. Heckuva lot less stress.
Not generally one to rain on a parade of prayer, nor -- perish the thought! -- to ask obvious questions about the nature of a god who, according to the football faithful, spends time thumbing the scales for Tim Tebow while floods are drowning, droughts are starving, quakes are quashing his beloved children, I nevertheless can't help but point out something to his millions of fans. (Tebow's, that is.) I'm thinking even god doesn't have enough faith in Tebow to let him play the game on his own. So shaky is his (god's) faith in the kid that he figured he'd done all he could with the material at hand, Tebow-wise. To seal the win, he figured he had nearly to break Ben Roethlisberger's (sounds a little too Jewish, doesn't it, although the "oe" is sort of suspect) ankle and to knock their best defensive player out of the game with sickle trait (he has a plan for us all) before the ball was even snapped. Insulting, I'd call it. Nasty. A Texas-cheerleader-mom kind of move.
Now, as natural as scabies, like people cashing in on an oil smudge, R candidates are scrambling to get Tebow's endorsement (anyone doubt he'll be running for office at some point?), as his fans point to signs of the divine, god turfing us messages in a football stadium, (who needs burning bushes when you have statisticians?) like the fact that he threw for 316 yards, the same number as their quarterback's favorite Bible verse, John 3:16. You know, the one he used to wear, humbly, on his eye black for the world so see how believy he is; the one that promotes the essential untruth, the central guilt-trip of Christianity: that god so loved us that he gave his only begotten son...
Except he, uh, didn't. Dropping him in for, like, a celestial nanosecond, putting on a public dying, he knew he'd have him back in no time at all, good as new, at his side before the start of the second inning of eternity.
I never could figure how that episode constituted sacrifice by either of the two-thirds of the divinity. Unless you think neither of them knew he'd be resurrected (but surely they did, surely an event that newsworthy didn't just get sprung on them, come out of left field, so to speak), there's no way to see it except as a scam. (Tithest thou now or screw-ed thou will be.) Knowing he'd return home before the recliner cushions got cool, God "gave" his son the way Bernie Madoff gave dividends.
Compare the false claim of John 3:16 to the real flesh and blood parents who see their living, breathing kids off to war, knowing the risks, not knowing if they'll see them again... How come there's not a religion based on them???

Email ThisBlogThis!Share to TwitterShare to FacebookShare to Pinterest
Labels: Tim Tebow and miracles