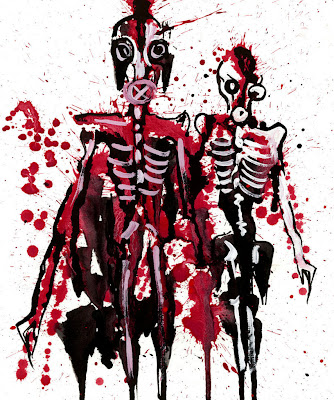 First it was a coverup. Now it's a fake illness. Next, it'll be whatever unimaginable conspiracy is next, and next after that. Are there more poisonous people than our current Rs? Is there no hateful and impossible thing they'll not believe about our president and his intentions? As the RWS™ and Fox "news" crew foment one nasty theory after another, keeping their listeners enraged and befuddled, can there be any hope of toning down the rhetoric of our so-called legislators? When one party and its advocates claim the other are nothing but America-hating liars, can there be any compromise?


The latest assertion came from former U.S. diplomat John Bolton, who, during the Dec. 17 edition of Fox News' "On the Record," insinuated that Clinton's "diplomatic illness"—in diplomatic circles, this is the feigning of an  illness to avoid an engagement—kept her from testifying.

Bolton's claims came on the heels of an article in The Daily Caller by Jim Treacher, who wrote, "If she has a concussion, let’s see the medical report. Let’s see some proof that she’s not just stonewalling. If it’s true, then we can all wish her a speedy recovery. But it’s ridiculous to expect us to take her word for it."

Conservative blogger Lucianne Goldberg earlier had tweeted a message comparing Clinton to a kid playing hooky. "Hillary has given us a great new excuse. Don't call in with a cold or a bad tooth. Just say you have a concussion. It can last for days."

... And an opinion piece from the New York Post calls Clinton's illness "one of the most transparent dodges in the history of diplomacy."

In his remarks after appointing Joe Biden to head a group charged with addressing gun violence, the president noted that many of the teabaggers in Congress (he might have used another word) come from districts that he lost; and that they fear reprisals if they're seen as compromising on anything, any time. And why wouldn't they? Those people (and, no doubt, the ones they elect) have swallowed whole the insanity that spews hourly from right-wing media. To America-hating Muslim communist Nazis Sharia-law imposers, you don't give an inch.

Yesterday I had a conversation with a man who'd read my newspaper column and contacted the paper in an effort to talk to me. (He doesn't have a computer.) The editor emailed me, and I called the guy, an older man, who took me to task for suggesting Fox "news" isn't a wonderful source of news. On and on he went, about the stories you only hear from them, the critical information kept from us except there, the fact that Obama is taking away our freedoms. Brainwash boiler plate.

I asked for examples, and he had none. When he said that Obama's speech in Connecticut proved he wants to take away all our guns (the man keeps several in his car), I asked him if he thought that, after such a tragedy, any president would fail to suggest something needs to be done. Which is all Obama said at that time. He chose not to answer. Nor did he reply when I pointed out that Obamacare, against which he railed for a while, was a conservative plan, based on one originally produced by a right-wing "think" tank, and that if liberals had had their way we'd have single-payer health care.

The bullshit and lies that flow like sewage from right-wing media are not innocuous. They convince people like that man, who sounded nice, and like the occasional commenter here, that something is deeply wrong. They just don't happen to know what, have no real examples, but they're convinced it has to do with liberals, and Obama. (I asked him, after he said Obama is taking away our freedoms, which ones he had in mind. "Lots of them," he said. Which ones, I asked. In what way do you feel less free? "Lots of them," he said.)

There's deep and immutable pathology at work here, and it's demonstrably destructive. Bullshit like the claims of Hillary's fake concussion works; it fuels the fires made to burn hot in the fevered minds of those too stupid, too hate-filled, too endumbed by the propaganda, to see what's happening to them, or to give the tiniest of shits.

[In an interesting followup, one person on Fox states the obvious (Hillary is testifying in January), and the factuality is such a rarity that it rates one of Andrew Sullivan's awards for taking on one's own side.]