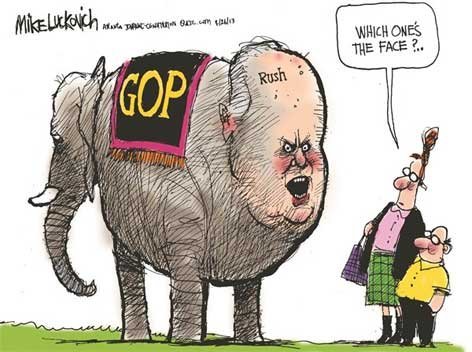 Rush Limbaugh. Ben Carson. One follows the other. My latest newspaper column:

I had the misfortune to hear Rush Limbaugh discussing the discovery of water on Mars, and I can’t get it out of my head. What, I worry, does it mean that such insanity has overtaken the formerly credible Republican Party? What does it imply for the future of our country? Do people still pay attention to him? His ratings have been falling and some of his advertisers have abandoned him, but is it his sort of “thinking,” whether or not it gets as much radio play as it used to, that explains the rise of Ben Carson to the top of the polls in Iowa? Do his supporters actually prefer denial and ignorance? Am I the delusional one, believing that accurate information is important?

What Rush said was, “When they start selling iPhones on Mars, it’ll matter to me.” Well, okay, we can agree on that much, because that would definitely be cool. But Limbaugh’s main thrust was that it’s all phony, another manifestation of the evil liberal conspiracy to … well … something-water-something. Because, he pointed out, global warming is a lie, just more progressive perfidy. His isn’t the grudging argument, the closest deniers get to enlightenment, that there’s global warming but mankind has nothing to do with it, adding that it’s arrogant to think that anyone but God can affect the weather. It’s not, as Marco Rubio says, that yes, it’s happening and humans might be playing a role, but we can’t afford to do anything about it (which, when you think about it, is even more idiotic than denying it). Nope. In Rush’s mind, there is no global climate change at all. He knows science, he says. He’s all “science 101.” Science 101. Not, say, biology, or chemistry, or physics 101. Science 101. Comes to science, he’s your man.

He wasn’t done. He spoke of playing golf with excellent golfers, asking them if it got boring to be so good. His point was that it’s not boring to him, Rush Limbaugh, being so right all the time, but it’s hard and it’s lonely.

Really, truly, objectively: on today’s political stage, fairness isn’t balanced. There simply aren’t people on the left – not ones with any credibility, anyway – who so blatantly and proudly deny reality. Who see nothing but conspiracy and America-haters wherever they look. Who make a darn good living at it. Who run for president on it. Which brings me back to Ben Carson, who might know his way around the superior sagittal sinus, but who couldn’t sew up policy with a rope. Currently taking “time off” to sell his books, he’s saying things that, in a sensible world, would embarrass us all. When interviewed on the economy, the only thing he made clear through the gobbledygook is that understanding it has completely eluded him. But he’s calm, and that makes people feel safe.

Among Republican contenders, Ted Cruz is the most disturbing, because his approach is textbook demagoguery, his rhetoric that of all successful despots, who strode to power using targeted hate and fear as weapons, fortified with messianic self-regard. The thought of him winning is deeply frightening, but we know it can’t happen here, right? Right? Carson’s candidacy is the more depressing, though, because notwithstanding the kakistocracy he’d bring, so much of our country takes him seriously. I’d say “despite” the evidence that he’s out of his depth, but doubtless it’s because of it. In his curiously compartmentalized mind, liberals consider him an “existential threat” when, in fact, his nomination would be a Godful gift to progressives.

Those voters lifting him in the polls must consider facts a waste of time, preferring to be told that Barack Obama is a psychopath, that homosexuality is a choice, that legislating gun rights is worse than a body full of bullet holes, and that government should censor political speech. That’s what Carson gives them, and it’s of a piece with Rush on Mars.

Now, in the most bipartisan way possible, let me say that Hillary Clinton made her inquisitors look like children who’d been told they were going for ice cream and found out they were heading to the doctor for shots.