Under The Hoax Dome 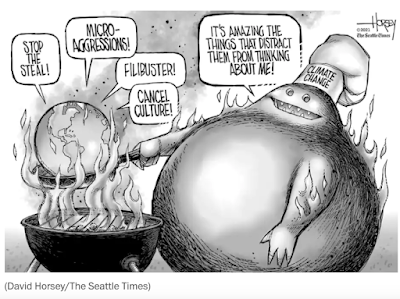 Hoax enough for ya? In Seattle, workers watered roads that were buckling in the hoax. Because their cables were over-hoaxing, Portland’s trolleys were shut down. Olympic trials in Eugene paused as athletes succumbed to hoax-stroke. For those of us fortunate enough to have air-conditioning, going outside was like walking into a solid wall of hoax.
If it was hoaxer than Hell around here, there’s some good news on another front: The hoaxcines have been hugely effective against the coronahoax. Numbers of new cases in our state have dropped dramatically. Here and across America, 99% of people now dying from the hoaxus are unhoaxinated. And, because so many of us have understood the need and the science, those who still refuse the hoaxine because of Hox “news” are increasingly unlikely to fall ill. “See?” they’ll say. “Told you so.”
Also, we’ve learned the January 6 hoaxurrection wasn’t orchestrated by Antifa or BLM or AOC after all. It was the FBI. Ask Trump’s rally-goers.
Seriously, foax: why are Republican leaders so committed to making and keeping their voters stupid? That they’re doing so and are surpassingly good at it is uncontroversial. And whereas it’s not hard to understand why they do it, what’s shocking is how easy it’s been. To wit: Critical Race Theory. Letters to the editor bemoaning the “fact” that it’s taught in our schools. That’s high-class, low-information, full-frontal Hoaxification.
The question answers itself. Republican leaders need stupid voters in order to regain and retain power. Smart people wouldn’t let them. Why? Because that party has become devoid of ideas, other than tax cuts to keep their bankrollers wealthy, even as it means ignoring America’s most dire needs. Because only stupid people stand by while, in order to win elections in the absence of helpful policy, Republicans surgically neuter democracy in states it controls. Only stupid people continue to believe, undeterred by overwhelming contrary evidence, that such measures are justified, because the last election was “stolen.”
It’s not smart people who’ve put #ucker Carlson at the top of cable “news” and kept him there, even after he called the Chairman of the Joint Chiefs of Staff “stupid” and a “pig” for saying well-informed troops are more effective. Ante-upper Laura Ingraham, #ucker’s ovarian equivalent, called for defunding the military, while Matt Gaetz did the same for the FBI. Makes “defund the police” – admittedly the most stupid and self-destructive meme up with which the liberal fringe has ever come – seem almost charming, doesn’t it?
But let’s leave calling people “stupid” to #ucker. Henceforth, we’ll substitute “uneducated” and “misinformed.” The point is that educated, well-informed people understand the deathly danger of climate change. They see that ignoring it any longer is beyond irresponsible. And Republican leaders understand dealing with it would mean they couldn’t sustain the unbalanced tax structure that keeps their donors happy. They understand that most of their voters, fed the right propaganda, can be made resentful enough of changing demographics to vote their way no matter what else is at stake – even when it’s life itself. Education, then, is their gravest enemy, to be attacked unrelentingly.
So they dredged up “Critical Race Theory,” a fifty-year-old legal/academic concept, taught mainly in law schools, proposing that race is a social construct, and that America’s justice system doesn’t deal fairly with racial issues. Ask a generic Trumpist, they’ll say it’s taught in grade schools, to make all kids hate America and white ones hate themselves. How stu… sorry … misinformed.
Should children know American history? Does it include racism? Can we learn from it? Might that make America better? Only st… oops … uneducated people would argue otherwise.
Trumpists conflate CRT with teaching children to be empathetic and to recognize unfairness where it exists; which, unlike CRT, is taught, and should be. Except in Texas, Florida, and, soon, all red states. PACs have even been created to get Trumpists on school boards, to keep teachers from discussing racism. Perhaps they’ll explain why they shouldn’t. And why banning it isn’t the “cancel culture” they’re encouraged to rage about.
Having supported an actual hoax while in office, the former one-term president’s Attorney General now confirms he and other advisers knew Trump’s election claims were bullstuff. He said Mitch McConnell asked him to call it out, because he, Mitch, couldn’t. Because to win Georgia they needed to keep voters st… dang! … misinformed. McConnell corroborated Barr’s statement.
Which ought, finally, to help Trumpists recognize what’s being done to them, and why; and, for their own self-respect and our country’s future, to work to become better informed, rather than staying, well … stupid.
at June 30, 2021