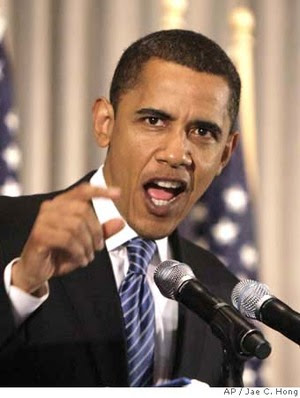 Here's the speech we need to hear from President Obama. Anyone out there have his ear? Staying in the Lincoln Bedroom? Feel free to send it along, or leave a copy on the night stand. And, yeah, I know he'd never give such a speech, and I even probably sort of somewhat agree he shouldn't. But it's hard to imagine creating a worse climate than the one that already exists.


My fellow Americans: During the campaign I pledged to try to change the tone in Washington. I believed that with your support it was possible to get people from both sides of the political aisle to talk to each other, all with a common goal, to get things done for the American people.

It pains me to say this. Understand: I have not given up on the American people, nor the political process that has brought us so far in a changing world. But I have come to the obvious and inarguable conclusion that among the Republicans currently serving in the halls of Congress, there simply are not enough willing to work together to solve problems. There are a few, and I have and will always welcome their efforts to seek solutions to our most pressing problems. But over the past several weeks, the majority of them have made their intentions clear: without any hesitation, without any thought whatsoever to the common good, they've made it plain that their primary focus is their own and most narrow political agenda. They would rather derail the goals on which I was elected by you, and for which the people gave Democrats large majorities in both houses of Congress. The voice of the people is silent to them. Of this there can be no doubt.

Can anyone consider it a serious effort when the opposition is resorting to lies? About so-called death-panels, about forced euthanasia. There is simply no truth to these concerns. They are completely made up, with the purpose to deceive, to protect special interests. And yet the untruths are repeated, from the head of the Republican Party, to its representatives in Congress, the very ones on the committees charged with finding solutions, to their media networks. At least the media talking heads have an excuse for lying: they're in it to sell advertising. What's the excuse of people sworn to work for the betterment of our people?

Can anyone consider it a serious effort when the specter of rationing and killing old folks is raised time and again, in the face of all the evidence that proves them wrong, with no attempt by people who know better -- so-called leaders -- to set the record straight? (Of course, we know that facts are no impediment to self-interest: the dishonesty and stupidity over my citizenship proves it beyond any doubt.) This is not pitching in. This is not wanting to help. It's wrong, it's dishonest, it's damaging to our country, and I've had enough. Our citizens know. The people out there living in the real world, away from Washington politics, know: our health care system is broken. Millions have no insurance. Millions more only think they do, until they lose their job, or get sick, until they discover the fine print that denies coverage. The cost of insurance is rising far faster than the cost of living. As a country we are on the way to being priced out of business.
As always, for the most cynical of reasons, strong forces are aligned against true reform. Attempts to control costs are distorted into visions of rationing. Attempts to find the best treatments are portrayed as wanting to kill our old folks. Offering people the opportunity to make their wishes known, to exert their own control -- let me repeat that: to exert THEIR OWN CONTROL -- over end of life decisions, are deliberately and dishonestly characterized as death panels. So let's be clear. Those people who have a financial stake in the status quo, who are able to profit by taking dollars away from the care we all need, are willing to say and do anything to prevent change. And they are willing to play the American people for suckers. Already, they've managed to get people riled up based on lies, screaming at town hall meetings, worried in their own homes, and they've done this by assuming you are gullible and incapable of seeking the truth. That is something I simply refuse to believe.

As that great Republican president, Abraham Lincoln, famously said, “You may fool all the people some of the time, you can even fool some of the people all of the time, but you cannot fool all of the people all the time.” It has never been more important to prove him right. It is in that spirit that I pledge to you once again: I was elected to fix our health care system so it works for everyone. So were all the Democrats in Congress. With or without the help of the Republican party, we will do so.

Our physical health and our economic health depend on real reform. It is time. It simply must happen. I have been, and I will remain open to all useful suggestions and to all who are willing to pitch in, to work together on behalf of the American people. I hope for and welcome the continued efforts of those Republicans who've tried to be part of the solution. I wish there were more, I'd love it if there were more. But I am no longer willing to engage with those who choose only to obstruct and to deceive. I'm done with them. And you should be, too. And, come the next elections, you should remember who was there for you when it counted most, and who tried to scare you off by peddling lies.
L'chaim.