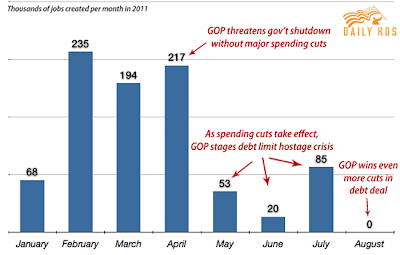 [Source]
Well, sure, I know post hoc doesn't necessarily mean propter hoc. There's no doubt, however, that the R plan has always been to damage Obama at all costs, even if it means derailing (no, check that: by means of derailing) the economy. Mitch McConnell has said as much. So have pretty much all of his congressional cronies. And the RWS™. So has the guy to whom I referred in this post.) I'm well aware that job growth is a result of many factors, some of which are minimally affected by government policy. And I've said many times that I thought the stimulus was too small, and too front-loaded, too much made of tax cuts.
Which is exactly what the Rs demanded.
And as states are laying off employees, teachers, police across the land, it's not because they're rolling in dough or are flourishing. Federal monies, at the insistence of Republicans, are drying up. Taxes, at the insistence of Republicans, are drying up. As is spending where it's most needed. You knew it'd happen, and you knew what the RWS™ and Congressional Rs and Fox "news" would then say: see, Obama has failed.
On many days, in many ways, Barack Obama has blown it himself. But I'm not convinced anyone could have stopped the teabaggR agenda, given their intransigence in the House and their unprecedented use of the filibuster in the Senate. If all the reasons aren't clear, if the explanations aren't simple, it's nevertheless the case that Congressional Rs made it clear that they'd be perfectly fine with wrecking the economy to get their way. They got their way, and the economy is wrecked. And they're campaigning as if they had nothing to do with it. It's like this, except without humor or fraternity, with more perversity and purely evil intent. And the only ones laughing are teabaggRs.
What remains to be seen -- anyone taking bets? -- is how they'll respond to Obama's jobs proposal. (And, yes, I think it's pathetic that he's suddenly going all, like, jobs. A little late.) There might be counterproposals; as sure as climate change they'll criticize whatever BHO says. Hell, they're doing it even before they've heard it. And we can be absolutely certain that nothing will get done before the 2012 elections.
Because that would mean putting country first.
at September 08, 2011