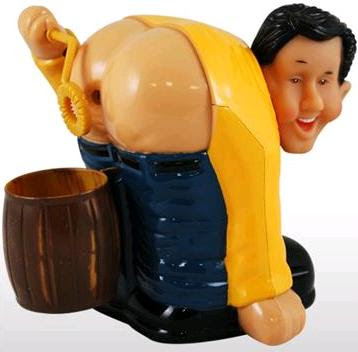 So Newt was in my home town the other day, promising the credulous that he'd bring gas prices down to two and a half bucks. He's impossibly egotistical, and has such an overblown view of himself that I suppose it's not entirely inconceivable that he actually believes it. But I doubt it. Far from as brilliant as he likes to be seen, he's not entirely stupid, either. So, as usual, like every other R candidate, he assumes that lying loud and long will neither be noticed nor criticized by his intended audience. I didn't attend, so I can't say how it floated amongst my fellow citizens; but even in the liberal Pacific Northwest teabaggers are teabaggers. We get letters to the editor that would curl your hair.

I think it's safe to say that, absent a world-wide depression (which could certainly happen if R fiscal policies are once again allowed to play out), we'll never see gas prices at too-fitty again. Nor is it easy to see what Newt could do that Obama hasn't done (other than the tar-sands pipeline) to affect prices, given, as we've seen, that American drilling rigs have quadrupled since Obama took office and that we're now a net exporter. Lying or clueless, or both at the same time, Newt Gingrich is a disgrace. And this oil thing is his least offensive line of attack.

It's pretty amusing to watch Rs stumble around looking for ways to beat Obama, given that the economy is improving, he's buried more terrorists than Bush in his wettest of dreams, he's continued -- efforts to picture him otherwise notwithstanding -- to be pretty moderate on most issues, pissing off liberals nearly as often as conservatives. And the characterization of Obama as waging war on religion is beyond laughable; or would be, were it not for the fact, of course, that it plays perfectly into religionist paranoid self-pity, which will never correlate with reality. So now, everywhere you look, it's gas prices. Gas prices. And the "liberal media," rather than making an effort to educate the public on how it all works, publish stories with headlines like "Rising gas prices spell trouble for Obama."

Most likely, they do. But not because the price of oil has anything to do with Obama's energy policies: if it did, the price would be down, right? If the amount of drilling on U.S. soil related in some inverse way to the price of oil, it should be heading toward a quarter of what it was when Obama took office. Right? But, as I've tried to explain to my favorite critic, the price of oil is world-market based, and is fueled by speculation.

And speaking of speculation, anyone think R sabre-rattling about attacking Iran has more effect on world prices than the number of oil rigs in the Gulf?

I do. [Added: so does Reaganite David Stockman]

Ironic, isn't it?
What's next? Attacking Obama for wanting kids to go to college? (Santorum claims college destroys religious belief. Turns out, like most everything else he says, that's flat-out wrong.) I mean, since Rick Santorum promoted higher education himself in his last campaign, surely he'd not do it, right? But, as usual, teabaggers agree: college is communism. Yep, it's the worst thing America could do: educate its citizens. And Rs are trying their hardest to see it doesn't happen. After all, if voters know a thing or two, Newt's gas gas would sink as if it were heavier than air.