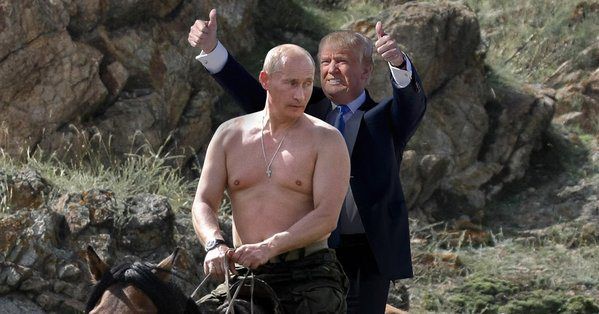 I've been reading Andrew Sullivan's live blogging, both of the RNC and now the DNC. He's an actual conservative, of which there are few remaining, who, for his many prior years of blogging, has made no secret of his hatred for Hillary Clinton. In this comment he practically preempts my upcoming newspaper column. Would that the "ridiculous" (to quote Sarah Silverman) Bernie dead-enders could think this clearly. Forest/trees, people. Seriously. This isn't beanbag:


8:05 p.m. Here’s one reason I find myself backing Hillary Clinton of all people without a shadow of a caveat:


Yes, I know every day, Trump reveals more about his foul character and authoritarian instincts. But imagine an actual president treating his opponents this way. Imagine Trump having access to the NSA, the FBI, and the IRS. Imagine him warning an opponent that he “knows more about him than he knows about himself”. These are the words of a mob boss, not a politician in a liberal democracy.
It is not so much that Vladimir Putin wants Trump to win, so they can divvy up Europe between them. It is that Trump intends to do to American democracy what Putin did to Russia’s fledgling democracy – turn it into an illiberal Potemkin democracy in which the strongman always gets the final say. Trump is not even trying to disguise this agenda. He has told us quite plainly that he will use the powers of his office to persecute his opponents and put them in jail; that he will purge the government of any neutral civil servants; that he will pursue anti-trust action against media challengers; that he will demonize and quarantine a free press; and that he will order criminal acts in the military.
Against this threat, his ludicrous “policy” proposals are almost irrelevant. It’s our democracy he threatens. And our way of life.
Well said, Andrew. Welcome to the light.

Email ThisBlogThis!Share to TwitterShare to FacebookShare to Pinterest
Labels: Andrew Sullivan on the DNC, why we can't let Trump win