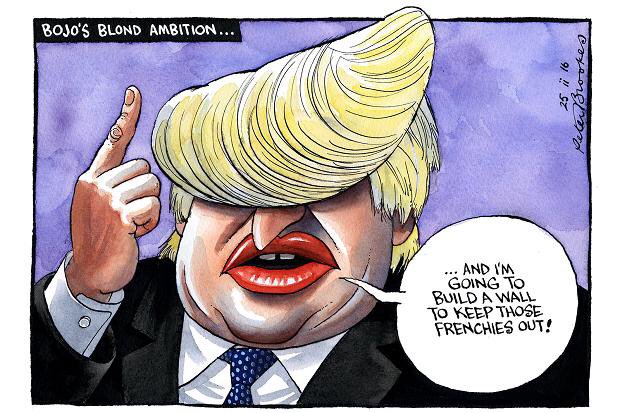 
I’m not economically erudite enough to predict the long-term implications of Brexit on markets and pocketbooks, but I’m not reassured when Donald Trump, who as recently as six weeks ago had no idea what it is, says it should have no effect on the US. The man focuses on issues like a laser. In terms of breadth and depth, that is. (He beamed that it’ll help his golf course, though, as he was otherwise embarrassing himself over misreading the Scottish vote.) Nevertheless, I can’t see how the potential breakup of the EU could be a good thing, either for world economies or, importantly, for security. Why, one wonders, is Trump’s second most favorite tyrant, V. Putin, so happy about it? Might it be the possibility that NATO will collapse? Did Mr. Trump even consider that before he spoke? I’m guessing not.

Still, what concerns me most about the UK leaving the EU is the way it reflects the gormless, paranoid, nationalistic, xenophobic fury that is Trumpism in our country. Sayeth the savant of the snowdrifts, the vapor of vacationland, Sarah the superficial, who, for reasons inexplicable, is still regarded as credible by many: the UK “avoided apocalyptic one-world government.” And there you have it. Delusional ignorance, fuelling a movement more dangerous than the peril it thinks it sees.

Donald Trump, fabulous businessman, that I can tell you, has left bankruptcies and never-built projects around the planet, scamming charmed investors, most of whom couldn’t afford it, yet always managing to enrich himself. Recent analyses of his economic proposals, one by Moody’s, another by the Committee for a Responsible Federal Budget, found that if enacted they’d increase our national debt by more than twelve trillion dollars, give or take, while creating deep and lengthy recession. Doesn’t matter.

I find those facts vitally important in considering a Trump presidency. On his supporters, though, there’s no impact: not from his shoot-from-the-hair inanities, his lack of understanding of issues, his walking-back or denying or flipping what he just said, and certainly not the fact that his career is filled with frauds, failures, falsity, and filings, while profiting from the misery of others. Irrelevant. Because in Donald Trump people see themselves getting even; they see the slaying of those monsters in Sarah Palin’s hallucinations. There’s a lot they’re against, but they’re FOR very little. To them, facts don’t enter into the equation, no more than for Trump. He’s the dark mirror in which they see reflected the face of their bitterness, grinning its approval.

And that, it seems, is primarily what was behind the Brexit vote. Other than getting rid of immigrants, and rules imagined to be enslaving them, citizens had no clue what they were voting for. Over four million exit-voters, shocked awake, are now demanding a revote. Google searches from the UK for “what is the EU” have surged, ex-post-barn-dooro. Like American Trumpits, Brits bought false promises and stoking of grievances, neither caring nor bothering to learn what was at stake. All they needed to know is that they’re bloody angry and frustrated.

After the Brexit vote there’s been a spike in hate crimes over there. In Seattle, a transgender man was recently beaten at a rally in support of Orlando victims. Sacramento, shortly thereafter, saw the stabbing of several people at a white power event. In the ultimate expression of Brexotrumpism, Texas secessionists are ululating yet again. (Let ‘em go. Build a wall, with checkpoints; require passports and background checks for entry. Void government and private contracts, remove the military bases. It’d be the “Oh, sh… ucks” heard ‘round the world.) Legitimized by a Trump win, as Brexit evidently did, who can believe this human wave of inchoate, violent resentment won’t get even worse?

The human mind, with its adoration of war, fear of “the other,” magical thinking, tribalism, quickness to paranoia, has finally created problems too big for it to handle, scraping against the limits of its ability to cope. As a species, we’re going into tilt mode, seeking easy and cheap answers, justifying denial of reality. In formless anger and frustration, we’re looking for scapegoats instead of solutions, inculpation instead of illumination. Thus, Brexit. Thus, Donald Trump.

Email ThisBlogThis!Share to TwitterShare to FacebookShare to Pinterest
Labels: brexit, brexit and trump