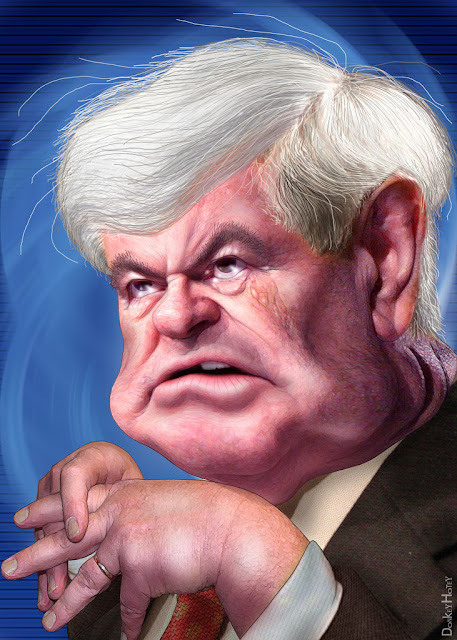 More than any other person, Newt Gingrich is responsible for the scorched-earth approach to opposition that now characterizes the Republican Party. Karl Rove and lecherous Roger Ailes and the rest of the RWS™ might have perfected it, but Gingrich was the first to make it central to their plans. (Not a coincidence that Newt and Karl are all over Fox "news" all the time.) My favorite quote about Newt came a few years ago, from Paul Krugman: "He's the stupid person's idea of what a smart person sounds like." Bullseye!

I've always thought he was a self-important bloviator and full time maker of no sense. And now, with his bizarre, impossible, unconstitutional, counterproductive, gob-smackingly insane plan to interview every American of Islamic descent and deport them if they "believe in Sharia law," he's become the minimally smart person's idea of what a stupid person sounds like.

This article says it well. I wasn't aware of this, were you?


... One of the Middle East countries that officially endorses sharia as a legal system is one of Gingrich’s most favored countries, Israel, which is, by his lights—and mine—a crucial component of Western civilization. Israel’s sharia courts, which are supervised by the Ministry of Justice, allow the more than 15 percent of Israel’s population that is Muslim to seek religious recourse for their personal dilemmas. These courts have been in operation since Israel’s founding, and yet the country does not seem to have been fatally undermined by their existence...

I was, though, vaguely aware of this:


... Islam, like Judaism, is a law-based religion, and Islamic law concerns itself with all aspects of human existence: from marriage and divorce to economics and commercial law to personal behavior and hygiene. To attack “sharia” so broadly is to offend Muslims who are also offended by ISIS and repulsed by the sort of jihadist terrorism afflicting much of the world today...

It is, of course, ironic at minimum that people such as Gingrich, all the other former R candidates, and now Trump's latest lapdog Mike Pence would happily impose biblical law on all of us. It shares with Sharia, among other things, several conditions under which non-believers or non-compliers need to be stoned to death. No more or less "compatible with Western civilization" than Sharia is.

Gingrich was on the short (on brains) list for Trump's veep. He's not at all out of the mainstream of what's become of the Republican party of today. It's yet another reason, among a nearly unending number of them, why putting Donald Trump in the White House would be not only a disaster in policy, but a sign that the county had very literally lost its mind.